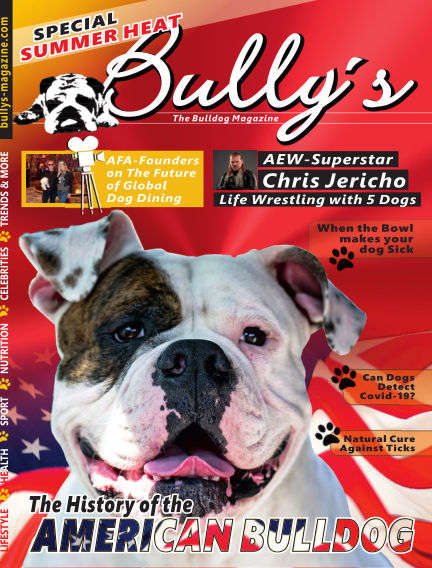 In this issue of Bully’s – The Bulldog Magazine : The highlight of this issue is a big summer and heat special. What you have to pay attention to in high temperatures and what you should avoid. And what your dog absolutely needs. You will also find out how you can protect your dog from harmful insects by natural means.

Chris Jericho is known as one of the best wrestlers in the world. The is also famous as a rock musician, touring the world with his band Fozzy. Bully's was allowed to visit him exclusively on his estate in Florida, where he lives with his wife, three children and five dogs. With a lot of never before seen photos.

In a large portrait the creators of the Angel Film Award at the Monaco International Film Awards, Rosana Golden and Dean Bentley, are introduced. There are also many exclusive photos.

The history of the American Bulldog is presented in detail. In addition, there are many tips on natural remedies, personal soul dog stories of the readers and much more.