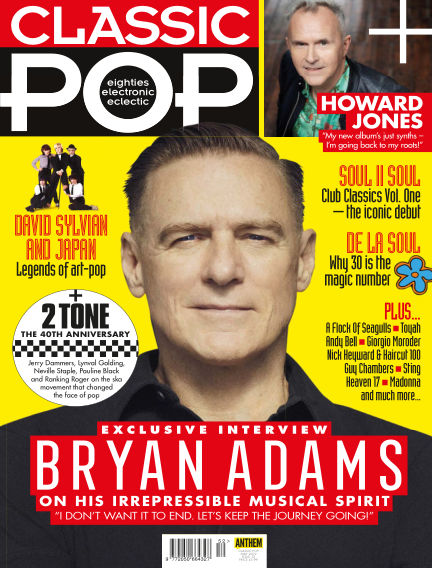 This month, we have an exclusive interview with Bryan Adams and get the inside track on his adventure-packed 40 years in music plus we meet Howard Jones who tells us why he's returning to his synth-pop roots for new studio album, Transform.

Classic Pop celebrates the 40th anniversary of the 2 Tone movement by speaking to those who made it happen including Jerry Dammers, Lynval Golding, Pauline Black and Ranking Roger; hip-hop legends De La Soul reveal the ties that have kept them together since their 1989 breakout LP 3 Feet High And Rising and we also talk to Toyah Willcox who explains why she's revisiting her 2008 album In The Court Of The Crimson Queen.

Elsewhere, we interview Erasure's Andy Bell, pop tunesmith Guy Chambers and A Flock Of Seagulls. We also have unseen photos of Nick Heyward and Haircut 100. Our Classic Album is Soul II Soul's Club Classics Vol One and we serve up a buyer's guide to Japan and David Sylvian.

Our packed new album reviews section includes Howard Jones, Morrissey, The Cranberries and The Waterboys. On the reissues front, Stephen Duffy's wonderful I Love My Friends makes its debut on vinyl plus there are re-releases from Heaven 17, Stevie Nicks, Julian Cope and more.

In our live reviews section, we check out gigs by The Specials, Giorgio Moroder, Emika and Stewart Copeland.

With Readly you can read Classic Pop (issue Issue 52) and thousands of other magazines on your tablet and smartphone. Get access to all with just one subscription. New releases and back issues – all included.
Try Readly For Free!
Classic Pop
ANTHEM PUBLISHING LIMITED
Tweet