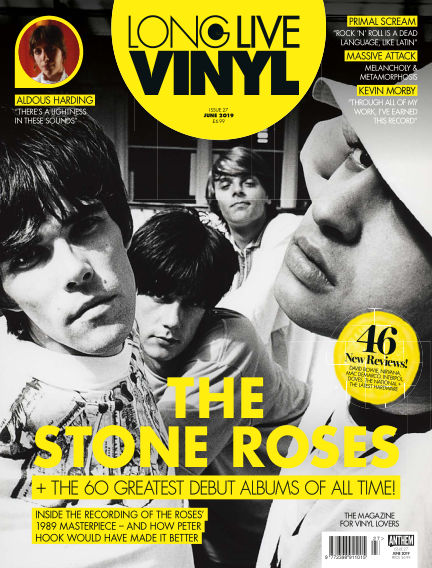 In this issue of Long Live Vinyl : In our cover story, we look back at The Stones Roses' classic 1989 debut album 30 years on from its release. Producer John Leckie takes us inside the making of the record and Peter Hook reveals how he would have made it sound even better. We also count down the 60 greatest debut albums of all time, from Are You Experienced to Unknown Pleasures.

Elsewhere, the irrepressible Bobby Gillespie guides us through Primal Scream’s new best-of collection, Maximum Rock ‘N’ Roll, Kevin Morby explains why a concept album about religion might be the best record he’s ever made, and we meet the outrageously talented Aldous Harding to hear about joyful new LP Designer.

We also profile the legendary Stiff Records and take an in-depth look at The Cure’s Disintegration – which turns 30 this year as the band prepare to headline Glastonbury. Legendary photographer Norman Seeff recalls shooting Blondie, Fleetwood Mac and The Rolling Stones, and if that's not enough we bring you the widest range of new album, reissue, turntable and accessory reviews anywhere on the newsstand.

Long Live Vinyl is THE magazine for vinyl lovers.

With Readly you can read Long Live Vinyl (issue June 2019) and thousands of other magazines on your tablet and smartphone. Get access to all with just one subscription. New releases and back issues – all included.
Try Readly For Free!
Long Live Vinyl
ANTHEM PUBLISHING LIMITED
Tweet