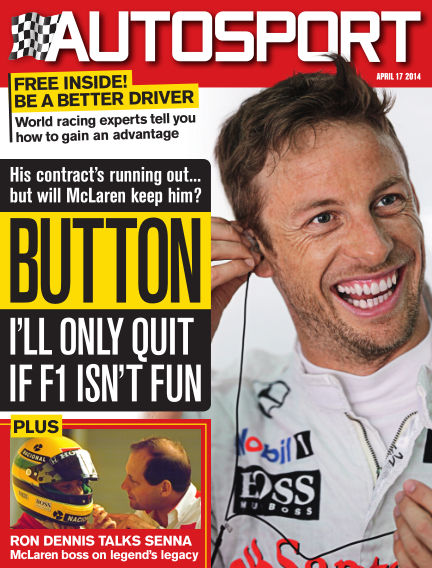 In this issue of Autosport : This week has been a timely reminder of just how quickly the world of Formula 1 can turn. While Red Bull’s unsuccessful appeal against Daniel Ricciardo’s Melbourne exclusion was being argued in Paris, Stefano Domenicali fell on his sword as Ferrari team principal, an American team officially threw its hat into the ring, and Mercedes’ technical director quit. Remarkably, in the past five months we’ve had team principals departing at Ferrari, McLaren, Mercedes and Lotus. It’s a state of affairs that probably makes every F1 paddock veteran think about their future, and that includes this week’s cover star Jenson Button. In his interview with Edd Straw on page 16, Jenson reveals, “…in the sport now I’m in a position where I need to enjoy it”. His enjoyment level shows in his driving, with some excellent race performances so far in 2014. He wants to continue, but it’s against a background of his contract running out at the end of the year. Next season McLaren begins its exciting Honda partnership. Does it do so with Button on board: a wise head, a proven world champion, someone who knows the Japanese company well? Or, like many others, does it turn the page? Charles Bradley - Editor

With Readly you can read Autosport (issue 17th April 2014) and thousands of other magazines on your tablet and smartphone. Get access to all with just one subscription. New releases and back issues – all included.
Try Readly For Free!
Autosport