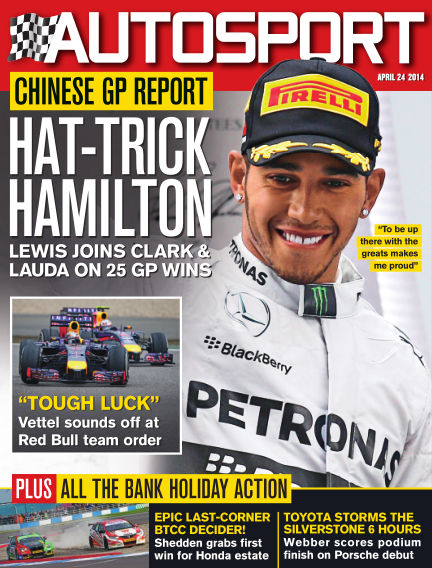 In this issue of Autosport : It is impossIble to compare eras directly, but when someone equals or eclipses one of the great landmarks of Formula 1, it’s important to take note and applaud them. In China last weekend, Lewis Hamilton broke Jim Clark’s record of grand prix pole positions by a British driver, and then equalled the flying Scot’s win tally the following day. The lights-to-fag manner in which Lewis did so was certainly in the mould of Jimmy, and should Hamilton now go on to equal Clark’s number of world titles, it would be no great surprise. Easter is always a busy weekend for motorsport, and this year we were blessed with marvellous sport right across the nation. From Silverstone’s World Endurance Championship opener to Donington Park’s BTCC, Oulton’s British GTs and the humble Castle Combe ‘clubbie’, there was some superb fare on offer. However, we were also reminded about the tragic side of our sport this week too, as Garry Whyte passed away from injuries sustained at Silverstone’s recent VSCC meeting. Following so soon after the death of Al Fleming at Hockenheim, our deepest condolences go to all the families and friends involved. Charles Bradley, Editor

With Readly you can read Autosport (issue 24th April 2014) and thousands of other magazines on your tablet and smartphone. Get access to all with just one subscription. New releases and back issues – all included.
Try Readly For Free!
Autosport