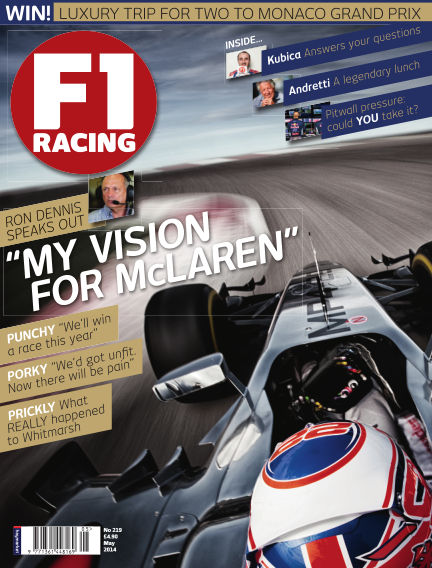 In this issue of F1 Racing : The rush to judge, the willingness to blame and the keenness to find fault that are sadly endemic within and without Formula 1 never cease to amaze. “The cars are too quiet,” said Bernie Ecclestone before he’d even heard one. “They’re too slow,” grizzled Fernando Alonso – commenting, presumably, on his own Ferrari F14 T rather than the Mercedes W05s of Lewis and Nico. “The fuel meters aren’t fit for purpose,” opined Christian Horner – boss of the only team to have fallen foul of their metering restrictions. And on it goes – a lament almost loud enough to drown out the buzz of positive energy that’s currently coursing through the sport, reinvigorated, as it has been, by new regulations, fresh faces and a more relevant vision of the future. Almost loud enough – but not quite, for F1 itself has delivered the best possible riposte to the naysayers. This year’s Bahrain GP was a breathtaking race and a timely reminder of why F1 remains a fantastically compelling sport. It served up great entertainment with plenty of pure racing and did so within the ‘constraints’ of a radically different technical framework. And we should pause to reflect on the scale of the technological achievement the 2014 grid represents. Eco-conscious, efficiency driven F1 constitutes an era change, not merely a rules tweak, and it should be considered in that light, not sniped at because it doesn’t deliver precisely the same fix as the aero-dominated, rev-addicted frameset that went before. Same drug, a subtly altered high, you might say – yet nevertheless a comprehensively different challenge.
It’s one that has exposed previously hidden vulnerabilities, while offering up new heroes. Who could have foreseen, for example, that Renault, winner of four straight constructors’ titles with Red Bull, would have started the year on anything less than full power? (See page 84 for an analysis of their troubles.) And who would have put money on the feisty Force India crew sitting at P2 in the constructors’ table after the first three GPs? Meanwhile, a promising clutch of young tyros are emerging in the form of Kvyat, Magnussen and Ricciardo. We catch up with Dan in this issue (p62), having shadowed him throughout his Australian GP weekend. Not much seems to knock the perma-grin off his face, although if he carries on in his current form, he could well dislodge the smile from team-mate Seb. That potentially tense intra-team rivalry is just one of many great storylines thrown up already by the rejigged rulebook and off season reshuffle; there are doubtless more to come (Hulk vs Pérez for Force India supremacy, anyone? Or “Valtteri is faster than you…”?). What is unsavoury about 2014 is the dieting forced on many drivers to ensure they hit the 691kg minimum total weight limit. Adrian Sutil, whose fighting weight is 75kg, tells us he can’t afford the weight penalty of a full drinks bottle in his car. Forget the noise about engine noise – there’s a problem that needs fixing.

With Readly you can read F1 Racing (issue May 2014) and thousands of other magazines on your tablet and smartphone. Get access to all with just one subscription. New releases and back issues – all included.
Try Readly For Free!
F1 Racing
Autosport Media UK Limited
Tweet