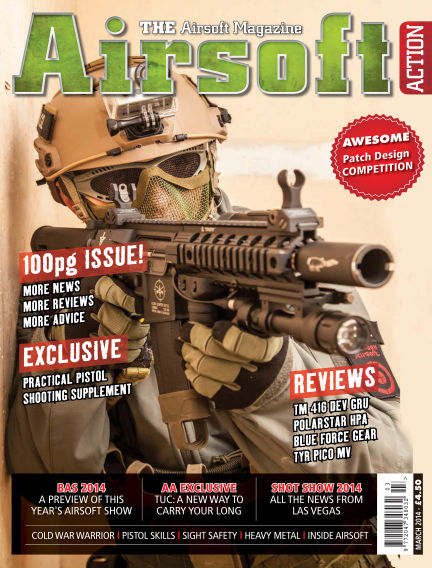 In this issue of Airsoft Action : We had so much to cram into this issue of Airsoft Action we had to make it bigger! So this is an extra, extra value, 100-page issue of your favourite airsoft magazine. Of course, it’s full of all your usual favourites including rifle reviews of TM’s version of the 416 DevGru - the rifle used by Seal Team 6 - and the revolutionary air-powered PolarStar; we Field Test both Blue Force Gear and TYR Tactical’s PICO MV; we have a UK first review of a potential sling-beater, the Tactical Universal Clip and our awesome PatchWerks Competition gives you a once in a lifetime chance to design an Airsoft Patch.
If that wasn’t enough, we also have our first Practical Shooting Supplement, where some of the UK’s top shooters introduce you to this adrenalin-fuelled and rapidly growing sport.
But we’re not finished yet…
We also preview The British Airsoft Show 2014, debate in-game vehicles, go on Operation Switchblade, look back at the events of The Great War and Normandy, meet “The White Death”, take a look at Eye Injuries and Swiss Army Camo and throw in three pages of News for good measure!
How’s that for a simply awesome airsoft magazine!!

With Readly you can read Airsoft Action (issue March 2014) and thousands of other magazines on your tablet and smartphone. Get access to all with just one subscription. New releases and back issues – all included.
Try Readly For Free!
Airsoft Action