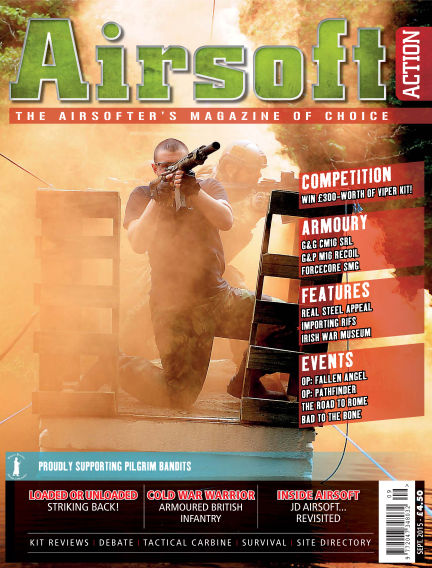 In this issue of Airsoft Action : WIN £300-WORTH OF VIPER KIT in 'THE AIRSOFTER'S MAGAZINE OF CHOICE'!
Viper Tactical have sponsored this exclusive competition and all you have to do in answer 5 simple questions!
On top of winning all that lovely Viper gear, we have THREE gun reviews, FOUR event reports and if you have ever wondered how much difference there is between your airsoft rifle and the real thing, we can tell you as Gadge reports from Canada, where he spent time on a range finding out.
Importing RIFs from the Far East can seem a cheaper option but when it goes wrong it can be a nightmare - as one AIRSOFT ACTION contributor found out to his cost!
If you are a fan of the TV series "Strike Back", we've put together some loadouts based on characters from the series. Plus, there's also Inside Airsoft, Cold War Warriors, Kit Reviews, Debate, a NEW SERIES called "GIVE IT TO A GEEK!" and loads more in this packed, 108-page issue of AIRSOFT ACTION!

With Readly you can read Airsoft Action (issue September 2015) and thousands of other magazines on your tablet and smartphone. Get access to all with just one subscription. New releases and back issues – all included.
Try Readly For Free!
Airsoft Action