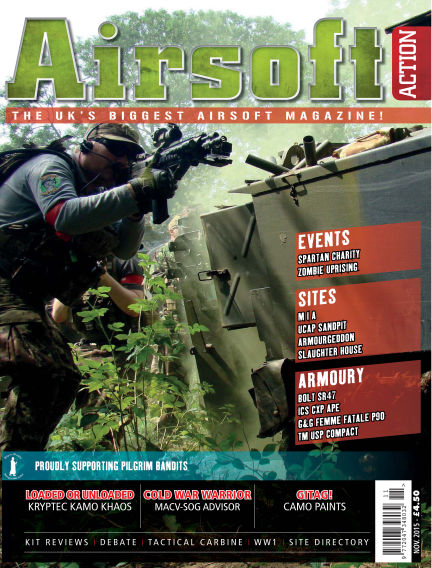 In this issue of Airsoft Action : Welcome to Issue 54 of the UK's BIGGEST Airsoft magazine! In this issue we take a look at four, yes FOUR very different guns - from the "pretty in pink" Femme Fatale P90 from G&G, to the shoulder-punching Bolt SR47. We report from four sites around the UK (including one as big as the City of London!), we fight Zombies, show you how to paint your rifle and even give you some ideas for in-game scenarios. Plus we have all our regular columns, such as Cold War Warrior, the Airsoft Action Debate, Loaded or Unloaded and we even throw in a bit of real-world combat for good measure.
It's no wonder that Airsoft Action is called "the airsofter's magazine of choice"!

With Readly you can read Airsoft Action (issue November 2015) and thousands of other magazines on your tablet and smartphone. Get access to all with just one subscription. New releases and back issues – all included.
Try Readly For Free!
Airsoft Action