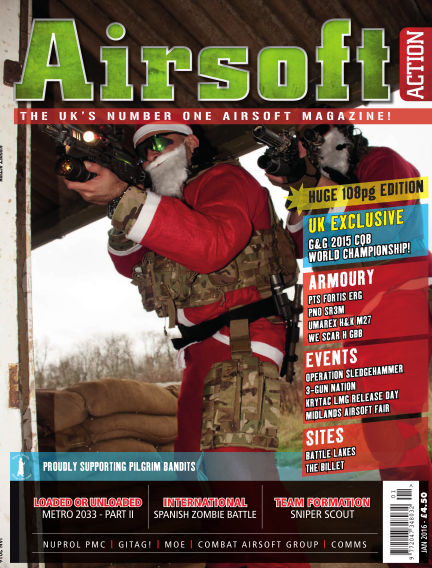 In this issue of Airsoft Action : From humble beginnings in Japan, “Airsoft” has grown into a world-wide phenomenon encompassing just about every country, particularly in the UK where it has seen an explosion in popularity. As the game has progressed, so has the desire for information and it was into this cauldron of excitement that Airsoft Action was launched in 2011.

Airsoft Action magazine is owned, written and published by people passionate about airsoft and includes a range of topics and articles that match the scope and diversity of the game itself. Be it replicating an historical battle, surviving in a post-apocalyptic nightmare, fighting zombies or taking part in a modern-day, military-based operation, Airsoft Action has over 30 contributors playing, photographing and writing for the magazine.

When it comes to factual articles, Airsoft Action’s contributors include published authors, historical experts, current and ex-service personnel and individuals that all have one thing in common - an in-depth knowledge of the subjects about which they write.

Since 2011 Airsoft Action not only become the UK’s BIGGEST airsoft magazine, it is also known as “the airsofter’s magazine of choice”!

With Readly you can read Airsoft Action (issue January 2016) and thousands of other magazines on your tablet and smartphone. Get access to all with just one subscription. New releases and back issues – all included.
Try Readly For Free!
Airsoft Action