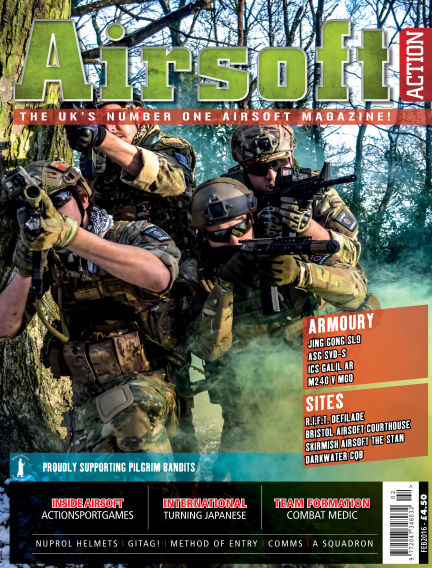 In this issue of Airsoft Action : The February Issue of Airsoft Action is 108 pages packed with... well... airsoft action!!
FOUR gun reviews, FOUR site reports, loads of Kit, including NUPROL Helmets, the latest from VIPER Tactical, a look at different PMR radios, Alpha-Tec Hex grenades and Jerry Noone takes advice from an ex-US Nay SEAL to make his GBB run better.
We head out to both Denmark and Japan for a bit of International Airsoft and to Catterick for the latest England v Scotland game. Ratty makes a welcome return, Gadge heads off into darkest Africa for Cold War Warrior and also looks at the role of a Team Medic while Sniper One, Dan Mills, writes about a battle that took place 80 years ago in a location where he fought more recently.
Nige met up with a great bunch of guys from Bravo46, Andy Nightigale continues his series on Methods of Entry and Paul Yelland reports from A Squadron's CTT2 Course with Bob Podesta.
Then, to round things off we have 2 pages of book reviews and over 4 pages of Site Directory.
That is one very full issue - hope you like it.
Airsoft Action - the UK's Number One Airsoft Magazine!

With Readly you can read Airsoft Action (issue February 2016) and thousands of other magazines on your tablet and smartphone. Get access to all with just one subscription. New releases and back issues – all included.
Try Readly For Free!
Airsoft Action