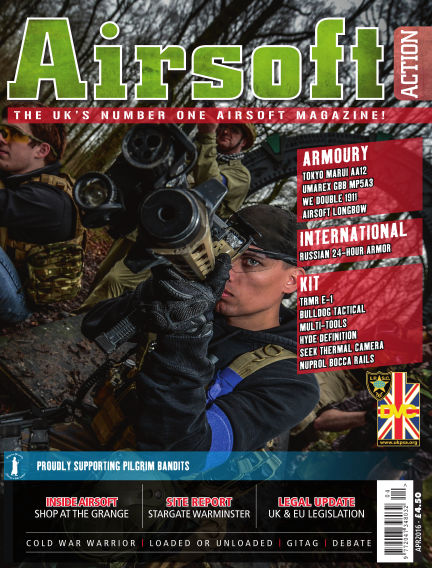 In this issue of Airsoft Action : Welcome to Issue 60 of the UK's Number One Airsoft Magazine - Airsoft Action!
In this issue we take a look at three, very diiferent airsoft guns; the thumping Tokyo Marui AA12, the fully licenced Umarex H&K MP5A3 GBB and very unusual the 1911 Double from WE - plus the UK's first ever Airsoft Longbow!

If you like your airsoft with a Russian flavour, then check out our report from just outside Moscow, where 4,500 players use tanks, APCs and military personnel to bring "MilSim" to a whole new level and then read how to put your own Russian loadout together.

We have a Special Report on HPA Systems and get "off-Worldly" down at Stargate: Warminster - and we have kit, loads of it! Everything from Multi-Tools, to the new TRMR X4 Vibrants, to Bulldog Tactical, to Hyde Definition, to NUPROL BOCCA rails, to Custom Patches. We even have a thermal camera that works in zero visibility! Of course, there is also the regular columns and features we know you like to read.

108 pages of Airsoft Action - it's what makes us the Number One Airsoft Magazine in the UK!

With Readly you can read Airsoft Action (issue April 2016) and thousands of other magazines on your tablet and smartphone. Get access to all with just one subscription. New releases and back issues – all included.
Try Readly For Free!
Airsoft Action