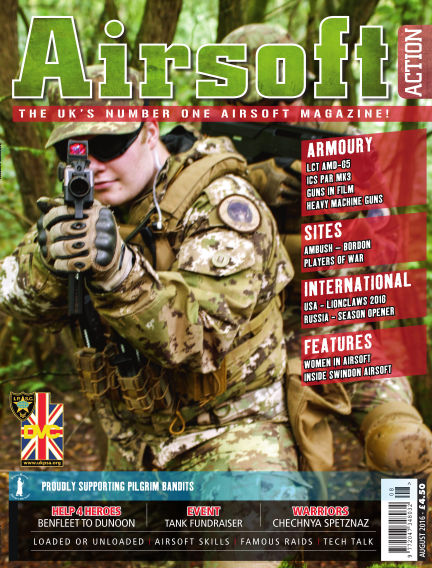 In this issue of Airsoft Action : Airsoft Action is the UK's Number One Airsoft Magazine, with more content, more gun reviews, more site reports... more of everything that makes Airsoft so great!
All of our 30+ Contributors are either regular players or are experts in their subject, such as "Sniper One", Dan Mills and Military Historian, Will Fowler.
Airsoft Action doesn't just concentrate of a single genre of airsoft, we believe that if it is in airsoft, then it should be in Airsoft Action. This is why you will find reports and coverage of the many, many different types of airsoft, such as MilSim, FilmSim, airsoft skirmishing, Post-Apocalyptic, Zombie, WW1, WW2, Vietnam and one of the fastest-growing shooting sports today, IPSC Action Air.
Over the last four years Airsoft Action is the only publication to have dedicated space and coverage to Action Air in the UK and in recognition of this, has recently been appointed as the exclusive UK Media Supporter of the 2017 Action Air World Shoot, to be held in Hungary.
Airsoft Action is also proud to support the charity Pilgrim Bandits.

With Readly you can read Airsoft Action (issue August 2016) and thousands of other magazines on your tablet and smartphone. Get access to all with just one subscription. New releases and back issues – all included.
Try Readly For Free!
Airsoft Action