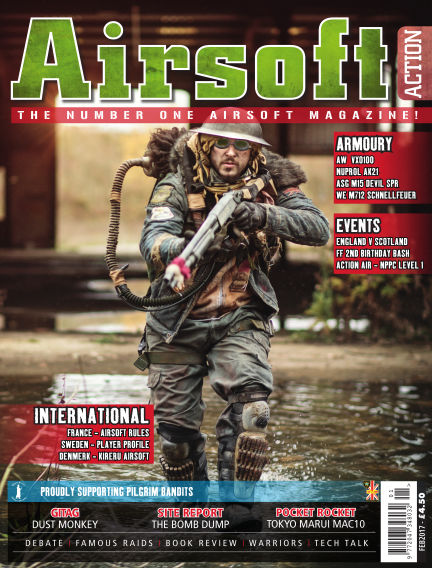 In this issue of Airsoft Action : Welcome to the first 2017 issue of Airsoft Action, the UK's Number 1 Airsoft magazine!
To kick the year off in style, we have a total of FOUR gun reviews, plus "Pocket Rockets" takes a look at the venerable (and much-loved) Tokyo Marui MAC 10.
We have event reports from the annual "Auld Enemy" England v Scotland game (did England pull a victory out of the jaws of defeat, or the Scotts win again?), all the action from the Action Air Level 1 Match held at the Northern Practical Pistol Club and join Femme Fatale at her Birthday Bash.
Internationally, we head to Denmark, France and Sweden while, closer to home we chat to the guys behind the quirkily-named "DTW Airsoft" and check out a great site at "R.I.F.T.: The Bomb Dump".
We're not lacking on features either, including a good look at the Russian "Gorka" combat suit, an interview with Bill Thomas about how he created his recently-seen "Modern OpFor" loadout and a chat with the creator of some of the most awesome Post-Apocalyptic loadouts we have ever seen, Dust Monkey.
On top of all that, we also have all our regular features and columns, such as (a quite controversial) Debate, Tech Talk, Famous Raids and loads of other kit and gear.
All in all, not a bad start to the year!
We hope you enjoy it.

With Readly you can read Airsoft Action (issue Feb 2017) and thousands of other magazines on your tablet and smartphone. Get access to all with just one subscription. New releases and back issues – all included.
Try Readly For Free!
Airsoft Action