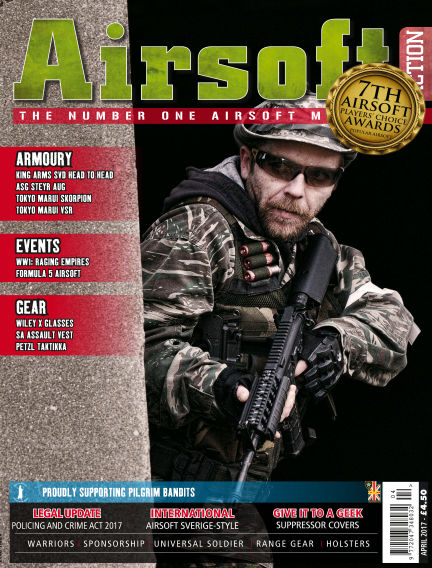 In this issue of Airsoft Action : Welcome to Issue Number 73 of "The Best Airsoft Magazine" - as voted in the 2017 Players' Choice Awards!

...but just because we've won this most prestigious of titles doesn't mean we're going to be backing off any time soon - and this issue is no exception!

There is so much in it, it is difficult to know where to begin, so here goes...

We look at no less than four different guns, Gadge starts a new "real steel" column with the venerable AK47 and also looks back at a classic piece of kit - and forward to a "Future Loadout". Stuart Howes reports from a new Gunman WW1 series called "Raging Empires", while Nige sees history repeating itself at the first Formula 5 Airsoft event.

Fresh from Las Vegas and the SHOT Show, Scott Allan brings us a first look at a highly innovative training device called "MantisX", Kelly "Femme Fatale" Hardwick tries out Wiley X's Saber Shooting Glasses, while Jerry Noone gives us the lowdown on some brilliant new items from Viper Tactical and also shows us how to create a great-looking Surpressor Jacket without spending a fortune.

We have International Airsoft from both Sweden and France, Warriors from Russia, two book reviews - including Andy McNab's latest Nick Stone novel - tents, torches, holsters, Sponsorship, Famous Raids, Universal Soldiers and even a bit of Airsoft Legal stuff thrown in for good measure!

So grab your device, put your feet up and enjoy reading The Best Airsoft Magazine!

With Readly you can read Airsoft Action (issue Apr 2017) and thousands of other magazines on your tablet and smartphone. Get access to all with just one subscription. New releases and back issues – all included.
Try Readly For Free!
Airsoft Action