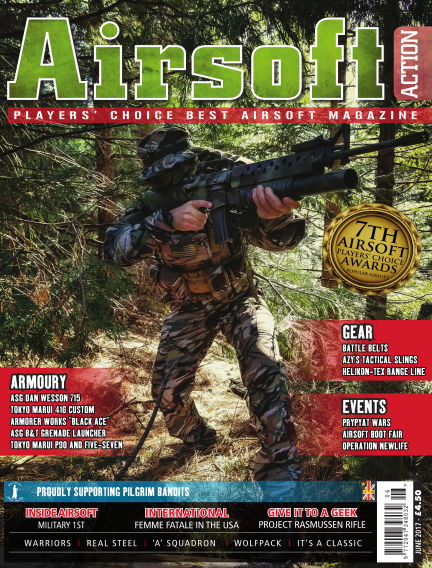 This issue has a bit of a "Guns and Gear" flavour, with a look at seven different weapons - from pistols to grenade launchers - plus Load Bearing Gear, Slings, Battle Belts and the superb "Range Line" from Helikon-Tex.

With so much going on, we get out and about to four very different events, including training with ex-22SAS soldier, Bob Podesta, fight "Prypyat Wars" in an active Amusement Park, visit "Operation Newlife" to raise funds for an excellent charity and head down to The Southern Airsoft Boot Fair, where we bag a bargain or two.

Heading out of the UK, "Femme Fatale" reports from the USA, as she spends seven weeks travelling and playing with Unicorn Leah and Jet Desertfox while closer to home we talk to Espen Dahl about airsoft in his country, Norway and visit a great site near Hastings called "1066 CQB", where the play is fast, furious and great fun!

We welcome back Sniper One, Dan Mills, as he starts a new series about Airborne Forces, profile a great bunch of guys from NW England called "The Wolfpack" and even have a feature on "The Greatest Army Invention Ever" - and we bet you'll never guess what it is before reading the article!

We've really enjoyed putting this issue together and hope you enjoy reading it just as much.

With Readly you can read Airsoft Action (issue June 2017) and thousands of other magazines on your tablet and smartphone. Get access to all with just one subscription. New releases and back issues – all included.
Try Readly For Free!
Airsoft Action