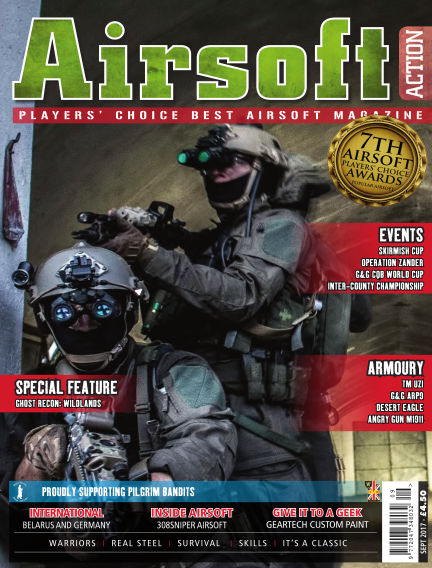 In this issue of Airsoft Action : With summer upon us it is "event" season and in this issue of Airsoft Action we have four, very different events from both at home and abroad, starting off with a full report from the G&G 2017 CQB Championship held in Taiwan. Closer to home we report from the 2017 Skirmish Cup, a rapidly growing 6-man tournament that has even managed to attract entries from paintball teams and then move onto Kent v Sussex, as part of the Inter County Airsoft Championship, before finishing at "Op Zander", a superb WW2 event that re-created the "hedgerow hell" of the bocage.
We've not forgotten all our readers who like the "hardware" side of things, with reviews of the G&G ARP9, Angry Gun's M1911, plus a look back at the Pocket Rocket that is TM's Uzi and the simply awesome "Desert Eagle" - and if you like your guns to look different, then reading GITAG is a must, as we talk to GearTech Custom about their awesome works of airsoft art!
If kit and gear is your bag then you are in for a treat as Gadge re-creates the four main characters from Tom Clancey's "Ghost Recon: Wildlands", with gear from 5.11 Premium Dealer, TacTree and Jerry Noone follows up with his take on the "Tactical Athlete", based on the same game.
Airsoft Action has an ever-growing band of international readers and this is reflected with articles from both Belarus and Germany ...and if that wasn't enough already, we also have our regular articles about kit, skills, survival and, of course, Warriors.
Is there anything we've missed? We don't think so!

With Readly you can read Airsoft Action (issue September 2017) and thousands of other magazines on your tablet and smartphone. Get access to all with just one subscription. New releases and back issues – all included.
Try Readly For Free!
Airsoft Action