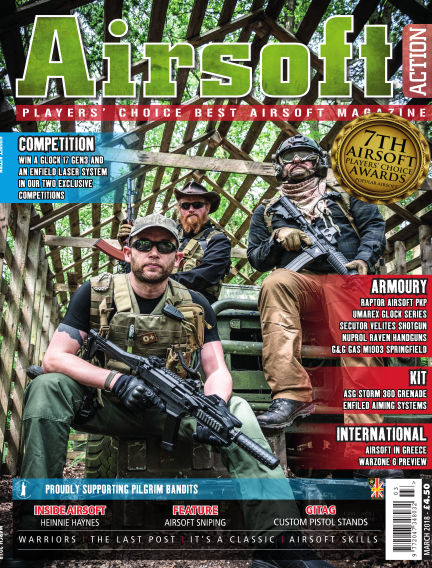 In this issue we have not three, not four but FIVE gun reviews, including NUPROL's new RAVEN pistols, Secutor's Velites Shottie, Umarex's fully licensed Glock 17, Raptor's PKP and the oldie but goodie, G&G Springfield bolt-action rifle!

There is also loads of kit and gear: Enfield's value for money Optics, ASG's New Storm 360 Grenade, Multi-Tools, Custom Pistol Stands, Soft Shells and a look inside an online company that is being noticed by more and more airsofters, Heinnie Haynes.

...did we mention our two competitions?

Ben Webb, in his first article for Airsoft Action, asks whether it is time for us to "stop gearing up for likes and start gearing up to get the job done" by putting the mission first, while Gadge ponders whether being an airsoft sniper is all it's cracked up to be and also takes a look at the (in)famous Galil Assault Rifle.

...and our two superb competitions!

Kelly heads out to West Midlands Airsoft:The FoB and also gets your views on the use of grenades in airsoft, while Bill Thomas speaks to Stelios, from the Rethimno Airsoft Association and also previews an up-coming huge event on the island of Crete, where both he and Kelly will be reporting from later this year. We might also be able to bring you some superb news in the near future, about a deal we are arranging with the organisers - so keep your eyes peeled!

...just in case we forgot to mention, we have two awesome competitions!

Rounding everything off we have all our usual columns and features, such as "Warriors", "Airsoft Skills" and Frenchie's "Last Post".

...and we also have two superb competitions, where you can win a Umarex Gen 3 Glock 17, kindly supplied by EZ Distribution and an Enfield ENFL41 Laser System, supplied by Armex. Nice!!

We hope you enjoy reading it as much as we did putting it together for you.

With Readly you can read Airsoft Action (issue March 2018) and thousands of other magazines on your tablet and smartphone. Get access to all with just one subscription. New releases and back issues – all included.
Try Readly For Free!
Airsoft Action