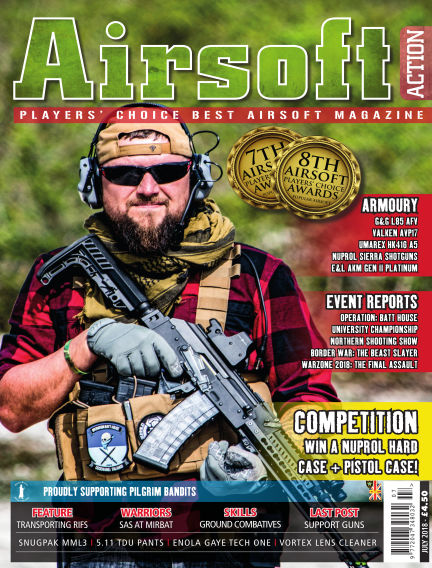 Airsoft Action has attended some massive events recently and in this issue we bring you reports from Warzone 6: "The Final Assault", The University Airsoft Championship, "Operation: Batt House" (based on The Battle of Mirbat and attended by one of the nine SAS warriors from the actual battle), The Northern Shooting Show and Border War 10: "The Beast Slayer".

Transporting your guns properly is vitally important and Gadge offers some tips and advice on how to keep them safe - and you out of gaol - plus, in this month's competition we are giving away a Large Hard Case and Pistol Case, courtesy of NUPROL.

Along with News, three pages of Gallery photos, features and articles, you can see why we say: "If it is in airsoft, it is in Airsoft Action!"

With Readly you can read Airsoft Action (issue July 2018) and thousands of other magazines on your tablet and smartphone. Get access to all with just one subscription. New releases and back issues – all included.
Try Readly For Free!
Airsoft Action