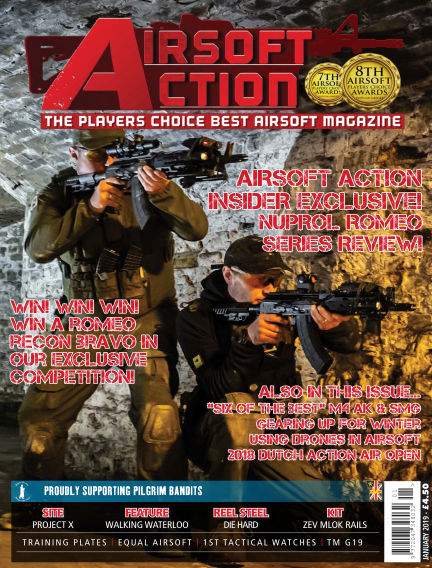 In this issue of Airsoft Action : It is not often you have the chance to be in at the very beginning of a project to build a new AEG from scratch but that is where Bill Thomas found himself when NUPROL decided to go ahead with "Project AK" and in this issue he brings us his exclusive "Insider" article about the creation of the ROMEO AK Series.
Also in this issue, three of our contributors present their "Top Six" airsoft AKs, M4s and SMGs. Phil Bucknall reviews the TM G19 and Nige heads to The Netherlands for the 2018 Dutch Action Air Open, while Tom Hibberd visits Project X and Angelo DV reports from Equal Airsoft.
In "Reel Steel" we find airsoft equivalents of the guns used in our favourite "Christmas film", Die Hard; Bill writes about winter gear and also how to keep your gear in top condition; Phil checks out the ZEV M-Lok rail from PTS and Craig from WA03 Media tells us how to stay safe and legal when using drones in airsoft.
With loads of other features, plus news, reviews and articles what more could you want...
...well how about the chance to win a NUPROL ROMEO RECON BRAVO??
Enter our EXCLUSIVE competition and you could be doing just that!
All that remains to say is we hope you enjoy the issue and have an amazing Xmas - see you on the other side!
The Airsoft Action Team.

With Readly you can read Airsoft Action (issue January 2019) and thousands of other magazines on your tablet and smartphone. Get access to all with just one subscription. New releases and back issues – all included.
Try Readly For Free!
Airsoft Action