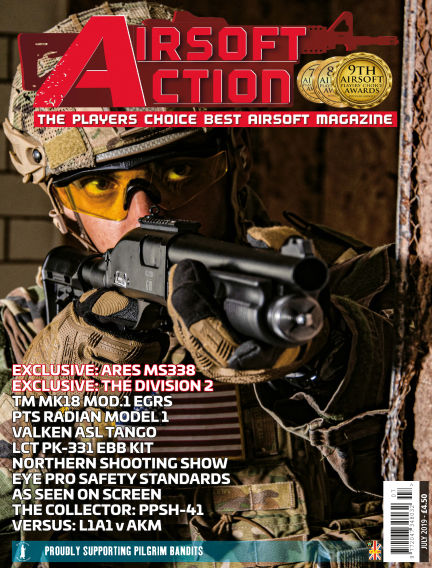 In this issue of Airsoft Action : With summer just around the corner, many player's thoughts turn new games, new gear and maybe also something new to put in "the armoury"! At Airsoft Action we are players too and we really enjoy telling you about the latest replicas to hit the market. This issue is no exception, as we open the AA Armoury a total of seven times, including an exclusive first look at both the stunning ARES Remington MS338 and the sublime Radian Model.1 from PTS, among others.
If you are into your gear and computer games, then make sure you don't miss our exclusive "Division 2" article, where we re-create three of the main character loadouts.
We all know the importance of having the correct eye-protection but do you know what all the standards mean and which are actually acceptable for airsoft? If not, Tom Hibberd explains everything and makes some recommendations in his must-read "Eyepro Safety Standards" feature.
This issue also sees the launch of three new features: "As Seen on Screen", "The Collector" and "Versus", alongside all our regular articles and columns.
Bill, Phil and Tom report from "Op Flashman", the latest Pilgrim Bandits Charity game, while Angelo D-V heads over to Anarchy Airsoft to get in some game time. Bill also reports from The Northern Shooting show, where the face of airsoft was well represented, albeit by a smaller number of companies than last year.
Wherever you are playing, play well, play fair and play safe!
See you out there!
The Airsoft Action Team.

With Readly you can read Airsoft Action (issue July 2019) and thousands of other magazines on your tablet and smartphone. Get access to all with just one subscription. New releases and back issues – all included.
Try Readly For Free!
Airsoft Action