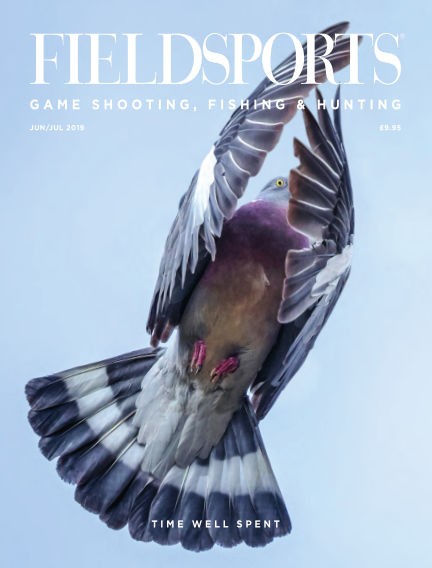 In this issue of Fieldsports : The summer months are often considered a quieter time for the avid fieldsports enthusiast, but there is still much that can be done to find your sporting fix both in the UK and further afield. In the June/July issue of Fieldsports we take readers on an exciting sporting journey from stalking roebuck during the rut and trout fishing in low water, to hunting bongo in Cameroon, fly fishing for redfish in Louisiana and much, much more.

British broadcaster, journalist and author Jeremy Paxman returns for Part II of his series on the most obscurely named salmon pools, Simon Ward answers questions on game shooting technique, and joining us in the interview room is Patagonia Ambassador and Environmental Activist Mikael Frödin and Chairman of the Game & Wildlife Conservation Trust, Sir Jim Paice.

With features on Holland & Holland’s new apprentice scheme, cooking over fire, keeping a gundog close, mental health in fieldsports and the surge in thermal imaging equipment to boot, to name just a few, there is something for everybody in this 196-page issue.

With Readly you can read Fieldsports (issue June/July 2019) and thousands of other magazines on your tablet and smartphone. Get access to all with just one subscription. New releases and back issues – all included.
Try Readly For Free!
Fieldsports
FIELDSPORTS PRESS LIMITED
Tweet