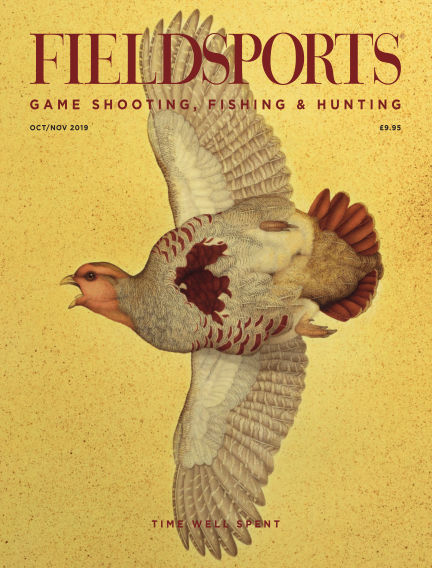 In this issue of Fieldsports : Volume II of Fieldsports Journal celebrates is first anniversary with Issue VII by taking on another exciting new direction by handing the reins over to a guest editor for the very first time. In the chair for the October/November issue is former Chairman of BASC and lifelong country sports enthusiast Peter Glenser QC.

Throughout the issue there are a number of topical opinion pieces, one of which he shares what are, in his view, the biggest threats to our sports and the country way of life which are compounded by the way we interact on social media. “It’s time to pull together,” he writes. “We are the quiet voice of rural Great Britain. We must call out wrongdoing where it occurs in our community. We must promote the eating of game and abide by the Code of Good Shooting Practice. We must think before we post on social media. We must be prepared to change our ways in the light of developing science should that become necessary.”

Of course, this issue lands on the doorstep in the thick of the partridge season and so there are reams of content to suit. Articles include a redleg partridge shoot in the Cotswolds, part 2 of the English partridge conservation series with Northumberland Estates, and a partridge shooting masterclass from top instructor Simon Ward to name but a few.

As always there’s something for the rifle Shot and fisherman; Simon K. Barr reports on an unforgettable buffalo hunt in the shadow of Uganda’s Mount Elgon, Diggory Hadoke gets an insight into the history and future of one of the biggest names in gunmaking, John Rigby & Co., while Gary Turner shares an autumn salmon fishing sojourn on the River Tweed, and Celine Artero talks about the fascinating new discoveries in sea trout habits.

Other highlights include the results of this year’s Leica Fieldsports Photographer of the year competition, a trio of autumnal recipes from The Woodsman restaurant, a gundog study and exclusive interviews with a number of prominent figures.

With Readly you can read Fieldsports (issue Oct/Nov 2019) and thousands of other magazines on your tablet and smartphone. Get access to all with just one subscription. New releases and back issues – all included.
Try Readly For Free!
Fieldsports
FIELDSPORTS PRESS LIMITED
Tweet