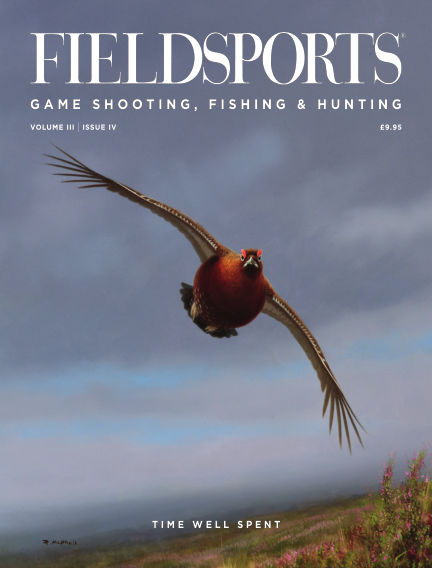 In this issue of Fieldsports : Guest edited by exalted sporting artist Rodger McPhail, the latest issue of Fieldsports Journal pays homage to the visual representation of country pursuits – in particular our native red grouse. Featuring many of his distinctive oil paintings, Rodger’s input promises insight into his uncommon thinking and unique perception. As someone you’d definitely include at your fantasy dinner party, the jolly Lancastrian shares witty anecdotes from a lifetime spent in the field, as well as details of his unusual passions outside of country pursuits.

This hard-hitting issue also tackles some prickly and emotive issues by interviewing BBC wildlife presenter Chris Packham CBE. Well-known for his unwavering campaigning against driven grouse shooting through his controversial group Wild Justice, the outspoken broadcaster was exclusively quizzed about his hard-line views on not only country pursuits but complex issues such as moorland ecology.

In addition, Chris has also written an exclusive essay for Fieldsports Journal in which he calls for a truce, once and for all. He wants both sides to stop fighting and start co-operating. He has devised a plan which addresses raptor persecution, lead ammunition, predator control, shooting endangered legal quarry, the release of gamebirds and the use of snares. Chris is frank and open, and you will devour his words and may even share some of his sentiment.

There is also a weighty feature on how trophy hunting saved the almost extinct markhor, plus saltwater fishing in the Seychelles and barbary partridge shooting in the Atlas mountains that will help satisfy your aching wunderlust. The Duchess of Rutland has penned an insightful piece about how Belvoir shoot will be adhering to government guidelines following CV19, and a Danish shooter shares his experience of using only steel shot since lead was banned in 1996.

With Readly you can read Fieldsports (issue Aug/Sep 2020) and thousands of other magazines on your tablet and smartphone. Get access to all with just one subscription. New releases and back issues – all included.
Try Readly For Free!
Fieldsports
FIELDSPORTS PRESS LIMITED
Tweet