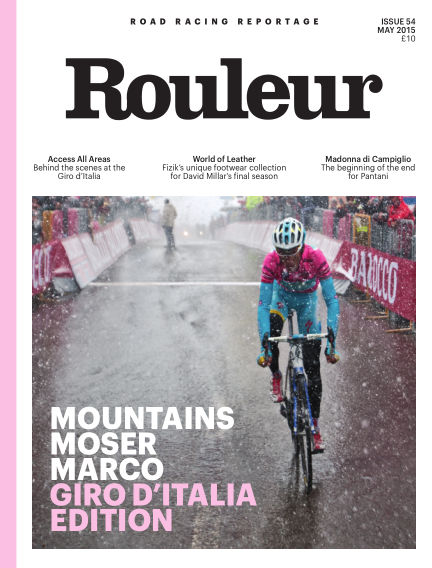 In this issue of Rouleur : Retroscena: Backstage at the Giro d’Italia. Fizik and David Millar: Designing a unique collection of race shoes for the retiring – but far from shy – Mr Millar in his final season. Moser v Saronni: “If I can’t win I’ll do all I can to stop him,” said Giuseppe Sarroni of Francesco Moser ahead of the 1981 Giro. They’re still arguing about it… Madonna di Campiglio: The Giro only visited the climb once prior to this year – 1999, a stunning ride from Marco Pantani, but the beginning of the ill-fated Italian’s downfall. Giorgia Bronzini: Andy McGrath meets the highly individual Italian sprinter. The Church at San Biagio: The story of Magni, Coppi and la Dama Bianca, in the words of Paul Maunder. Reynolds Cycling: Paul Lew of Reynolds is an expert in carbon, from racing car bumpers to bicycle wheels to drones. The bike industry is getting aerodynamics totally wrong, according to Lew.

With Readly you can read Rouleur (issue 54) and thousands of other magazines on your tablet and smartphone. Get access to all with just one subscription. New releases and back issues – all included.
Try Readly For Free!
Rouleur