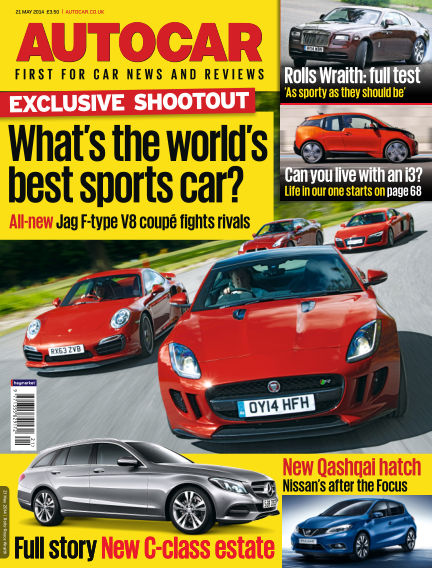 In this issue of Autocar : WHAT REALLY MAKES A GREAT SPORTS CAR? WE ADMIT IT: this week’s cover line is a little contentious. Arguably, the world’s best sports car might not be among the quartet we assembled. In fact, if the Porsche 911 GT3 wasn’t currently sidelined due to a well publicised threat of ‘thermal’ issues, it could be giving the new Jaguar F-type R coupé a harder run than the 911 Turbo. Equally, Porsche’s Cayman is also capable of earning a ‘world’s best’ epithet – as is a Mazda MX-5, a McLaren or a Ferrari. The debate will run. However, one of the refreshing reflections from this week’s group test is that what makes a great sports car is open to interpretation. Our cars are front, mid and rear-engined. They are powered by either a V6, a flat six or a V8, and three are four-wheel drive. In fact, only the F-type is rear-wheel drive, with rumour suggesting a 4WD option is also looming. What’s more, they have widely differing looks and characters, and each serves up a distinctly different way of going fast. Which, when you think about it, is hugely reassuring when you’re spending this sort of money.
Which is best? Turn to p38… Chas Hallett, Editor

With Readly you can read Autocar (issue 21st May 2014) and thousands of other magazines on your tablet and smartphone. Get access to all with just one subscription. New releases and back issues – all included.
Try Readly For Free!
Autocar
Haymarket Media Group Ltd