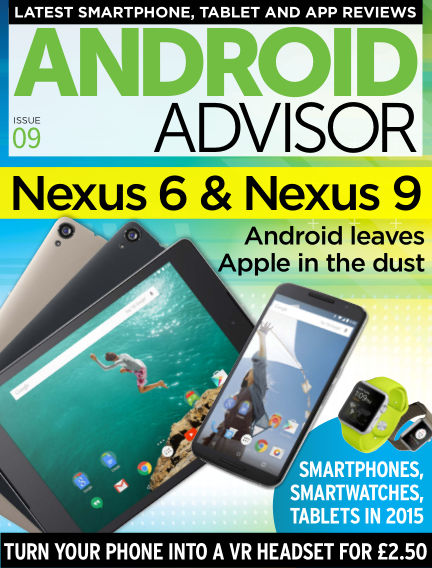 In this issue of Android Advisor : It was a poorly kept secret that Apple would unveil its iPad Air 2 and iPad mini 3 tablets on 16 October, a month after the release of its iPhone 6 and 6 Plus smartphones. So much so that Google managed to get in there first, unveiling its Nexus 6 smartphone, Nexus 9 tablet and the final build of its Android Lollipop operating system a day earlier.

But not only did Google pip it to the post, it did so with some fantastic devices that wipe the floor with their Apple rivals.

Sure, it's taken until now for those devices to actually be in stock at Google Play, but trust us when we say they're well worth the wait.

We've reviewed Lollipop, Android's sweetest ever OS, and compared the Nexus 6 to iPhone 6 Plus, and Nexus 9 to iPad Air 2.

Christmas and the new year are already upon us, which means we've a whole new year's worth of tech about which to get excited. We look at what 2015 has in store for smartwatches, smartphones and tablets.

To keep you busy over the Christmas break, we've also got a range of tutorials, including explaining how you can turn your Android phone into a virtual reality headset for as little as £2.50.

With Readly you can read Android Advisor (issue 9) and thousands of other magazines on your tablet and smartphone. Get access to all with just one subscription. New releases and back issues – all included.
Try Readly For Free!
Android Advisor