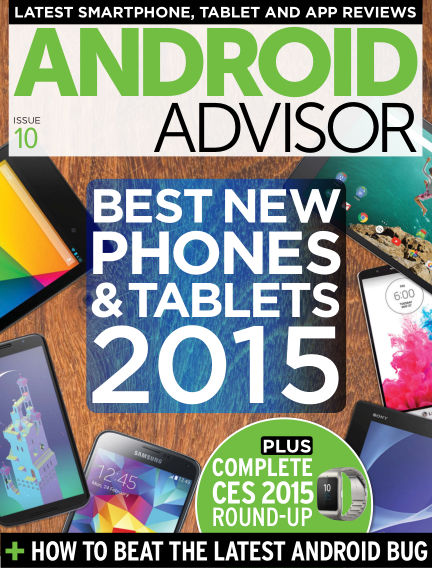 In this issue of Android Advisor : 2015 started off with a bang with CES 2015. We've rounded up some of the best new products from the show, and get a hands-on with some of those gadgets, including LG's second curved-screen G Flex.
But what really excited us at CES 2015 were smartglasses, so it came as a bit of a shock that Google cancelled its Google Glass Explorer Programme the following week. But Google Glass is down but not out, with a second version expected later this year.
And there's loads more to get excited about this year, too. In little more than a month we'll be welcoming the latest flagship phones from Samsung, HTC and Sony, and we're already excited. We round up the best new phones and tablets still to come in 2015.
The WebView bug has been in the news of late, making all devices running Android Jelly Bean and older vulnerable to hackers wanting to take control. Nearly 60 percent of Android users are affected! We show you how you can protect your device from new threats.
On the subject of security, if the kids got new phones or tablets for Christmas it's important you keep them safe online. Follow our guide to protecting them on their new devices.

With Readly you can read Android Advisor (issue 10) and thousands of other magazines on your tablet and smartphone. Get access to all with just one subscription. New releases and back issues – all included.
Try Readly For Free!
Android Advisor