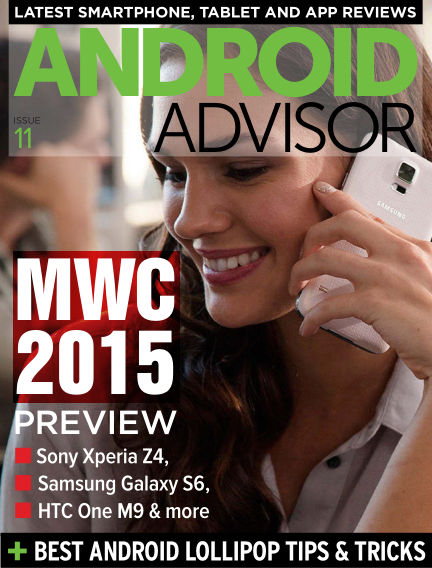 In this issue of Android Advisor : MWC 2015 is just around the corner. Expect to see the sort of devices that will set the standard for the year unveiled at the show, including three flagship smartphones from HTC, Samsung and Sony. We tell you what to expect from MWC, and show you exactly how far smartphone technology has come in the past year with our One M9, Xperia Z4 and Galaxy S6 previews.

If you're new to Android from iPhone, we also take a look at the Samsung Galaxy Alpha. Samsung has long been accused of copying Apple, but this is the ultimate Samsung iPhone - and we'd even go so far as to say the South Korean company does a better job of 'iPhone' than does Apple.

We've also reviewed a unique dual-screen smartphone in the YotaPhone 2, plus the thinnest smartphone in the world in the Kazam Tornado 348 – but this size-zero handset could do with a bit more meat on its bones.

With more and more phones and tablets getting Android Lollipop upgrades, we reveal our favourite tips, tricks and hidden features. We also take a look ahead to Android M, and reveal what we want to see in the upcoming mobile OS.

With Readly you can read Android Advisor (issue 11) and thousands of other magazines on your tablet and smartphone. Get access to all with just one subscription. New releases and back issues – all included.
Try Readly For Free!
Android Advisor