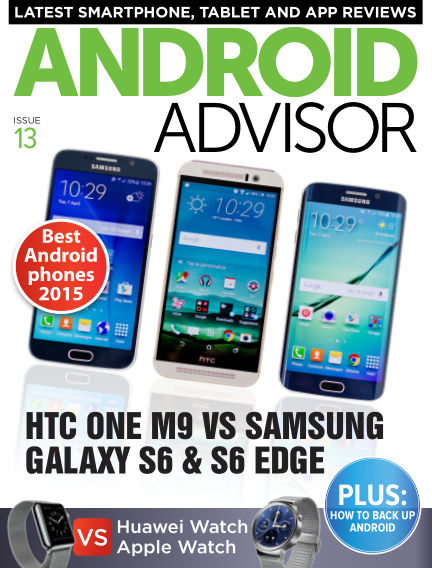 In this issue of Android Advisor : Last month we were excited to have just returned from MWC, where we got our first glimpses of the HTC One M9, Samsung Galaxy S6 and S6 Edge. Now we've had the chance to do some further testing, and reveal what is the best Android phone of 2015 so far.

So the S6 has lost its microSD card slot. It's not really such a big deal, is it? We show you how to add storage to Android. We've also got advice on how to back up Android and recover from a suspected virus.

Just about to go on sale as we went to press was the Apple Watch. It has to be one of the most hyped smartwatches ever... until the Huawei Watch came along. So, while everyone's getting excited about the Apple Watch, we check out how this stylish new Android Watch compares.

Motorola's been lining up the new phones, too - but this time we reckon it's just got it plain wrong. Find out how what was once the best budget phone got beaten by its little brother.

If you're looking for home entertainment, both Amazon's Fire TV Stick and the Google Nexus Player made their way to the UK this month. About time, too.

With Readly you can read Android Advisor (issue Issue 13) and thousands of other magazines on your tablet and smartphone. Get access to all with just one subscription. New releases and back issues – all included.
Try Readly For Free!
Android Advisor