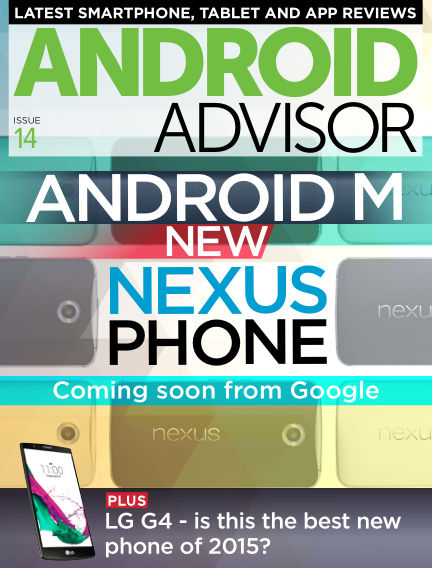 In this issue of Android Advisor : It's that time of year again when Google lets us know exactly what it's got in store for Android. Google I/O was scheduled to run just after we went to press with this issue, and we examine exactly what we should expect. It's more than likely we'll get a first glimpse at the forthcoming Android M OS, and although it may be too early for I/O we're already hearing rumours of a new Nexus phone for 2015.

But as well as looking at what's to come, we're celebrating what we've already got. We had big hopes for the finally announced LG G4, but is it another flagship killer? Find out in our full review.

When you're at home you probably switch to a Wi-Fi- rather than mobile connection for getting online on your Android phone or tablet. It really bugs us that in order to get Wi-Fi we also have to pay for a phone line we never use. But do we? We investigate the alternatives to ADSL.

If you are using a mobile connection, and particularly a 4G connection, you might be wondering about those advertised high speeds. It's fast, sure, but there's an important difference between 4G and LTE. If you're not getting the speeds you expect we explain why not.

With Readly you can read Android Advisor (issue 14) and thousands of other magazines on your tablet and smartphone. Get access to all with just one subscription. New releases and back issues – all included.
Try Readly For Free!
Android Advisor