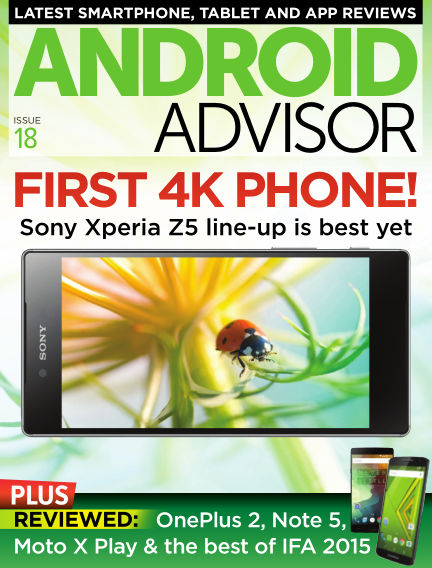 In this issue of Android Advisor : HD, Full HD, Quad HD... It’s going to take a lot more to impress us now, because at September’s IFA 2015 tradeshow we got our first look at an Ultra HD smartphone. Sony's Xperia Z5 Premium is one of THREE new phones in its flagship Z-series; we explain the key differences between each model. We also look at the Samsung Galaxy Note 5, OnePlus 2, the UMI Iron, and two new Motorola’s, the Moto G and the Moto X Play. Smartwatches are all the rage, too, with Huawei finally announcing pricing and availability for its Watch. We’ve got hands-ons with the brand-new Moto 360 and Samsung Gear S2, too.

With Readly you can read Android Advisor (issue 18) and thousands of other magazines on your tablet and smartphone. Get access to all with just one subscription. New releases and back issues – all included.
Try Readly For Free!
Android Advisor