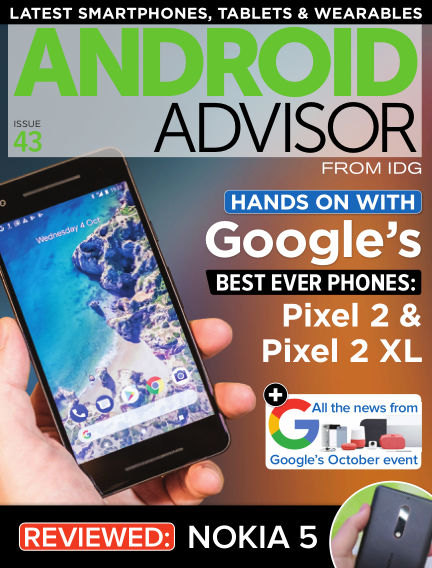 In this issue of Android Advisor : This issue we’ve all the news from Google’s October event. As expected, the firm revealed its latest phones – the Pixel 2 and Pixel 2 XL. You can read our first impressions inside. This was, however, just the tip of the iceberg. The tech giant also expanded the Google Home line-up with two new smart speakers, tweaked its Daydream VR headset, and finally rolled out the Pixelbook – a sleek successor to its swanky high-end Chromebook Pixel. Plus, a Babel Fish-like rival to Apple’s AirPod earbuds even appeared. We also have reviews of the Nokia 5 phone, the Cube iPlay 10 tablet. Plus, we’ve 30 pages of tutorials, including how to transfer everything from an old phone to a new one, and how to update Android on your phone.

With Readly you can read Android Advisor (issue 43) and thousands of other magazines on your tablet and smartphone. Get access to all with just one subscription. New releases and back issues – all included.
Try Readly For Free!
Android Advisor