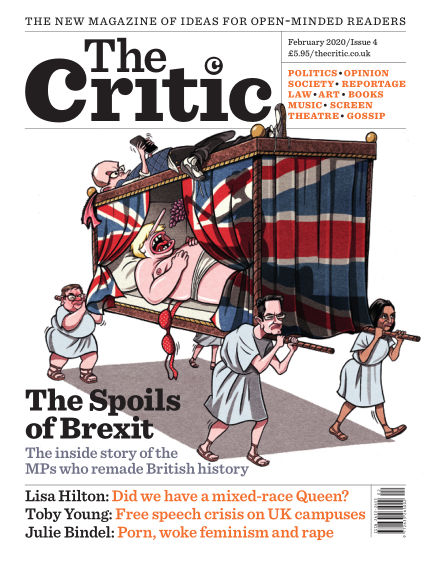 In this issue of The Critic : Britain's new magazine of ideas for open-minded readers. In issue 4: David Starkey on the Four Nations; Jonathan Meades & Titania McGrath on the limits of optimism; Toby Young on the attack on free speech in universities; Julie Bindel on how "woke" feminism has created a new misogyny; Lisa Hilton goes in search of Britain's mysterious African queen; Daniel Johnson pays tribute to Gertrude Himmelfarb; Richard Cockett on India's rape crisis; Anthony O'Hear on Roger Scruton's philosophy; Douglas Murray on snowflakes; Ella Whelan on women & capitalism; Hannah Betts on buying black; Nick Cohen on training for a marathon & Patrick Galbraith on shooting as a cure for depression. Plus the inside story of how the ERG delivered Boris, the leading Brexiteer you have never heard of & the secrets of the Lobby.

With Readly you can read The Critic (issue February 2020) and thousands of other magazines on your tablet and smartphone. Get access to all with just one subscription. New releases and back issues – all included.
Try Readly For Free!
The Critic
LOCOMOTIVE 6960 LIMITED
Tweet