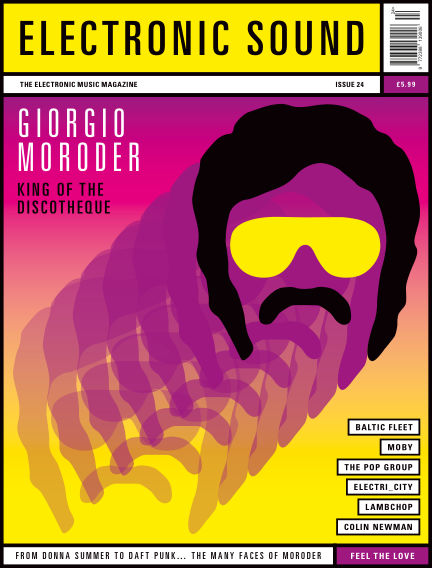 In this issue of Electronic Sound : When Giorgio Moroder he’d like to talk to you, the best course of action is to sit back and listen. The colossus of European electronic music duly covers everything, from his early days with synthesisers to how Daft Punk placed him in the consciousness of millions of new listeners and how the art of the DJ sustains him.
We also visit Düsseldorf in this issue, where we pay our respects at Kling Klang, admire Florian Schneider’s father’s architecture, and we meet his sister, all in an attempt to get a psycho-geographical perspective on this ultimately mysterious band. We chat to Moby about his new album and his relocation to LA, to Colin Newman of Wire about the re-release of his solo albums, and to Kurt Wagner of Lambchop about his latest album which is a masterclass in the use of new sounds and textures. Mark Stewart of spectacularly resurrected agit-dub-punk-noise legends The Pop Group shares with us his faith in technology and sci-fi futures, while Baltic Fleet discusses Paul McCartney and 808 State. See if you can spot the mentions of Raquel Welsh, Dean Martin, Led Zeppelin, Freddie Mercury, The Rolling Stones and David Bowie along the way, and you might agree that it’s a dizzying mix this month...

With Readly you can read Electronic Sound (issue 24) and thousands of other magazines on your tablet and smartphone. Get access to all with just one subscription. New releases and back issues – all included.
Try Readly For Free!
Electronic Sound