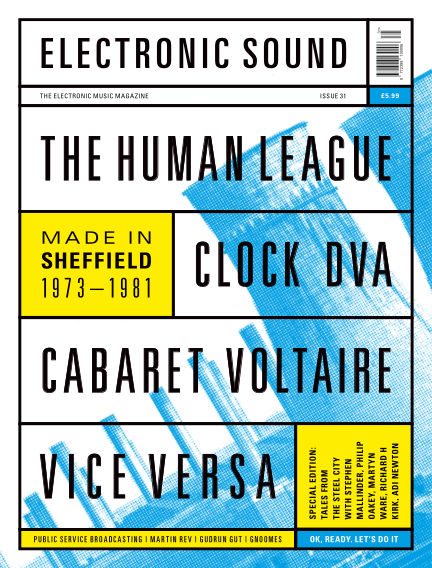 In this issue of Electronic Sound : The city of Sheffield stars on our cover this issue. Through the eyes of The Human League’s Philip Oakey and Martyn Ware, Clock DVA’s Adi Newton, Cabaret Voltaire’s Richard H Kirk and Stephen Singleton and Mark White from Vice Versa/ABC, our Made In Sheffield feature tells the story of how, between 1973 and 1981, the Steel City became one of the world’s electronic music capitals.

Former-Cab/Wrangler’s Stephen Mallinder provides his unique take on the city’s formative years, while I Monster’s Dean Honer explains how the city isn’t resting on its laurels and supports a vibrant electronic community to this day.

With Readly you can read Electronic Sound (issue 31) and thousands of other magazines on your tablet and smartphone. Get access to all with just one subscription. New releases and back issues – all included.
Try Readly For Free!
Electronic Sound