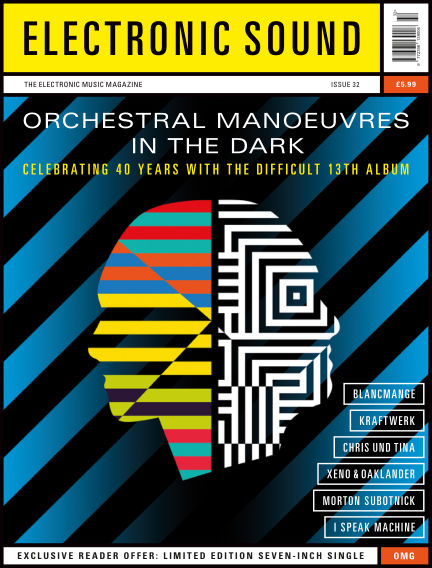 In this issue of Electronic Sound : On our cover this month it’s Orchestral Manoeuvres In The Dark who make a welcome return with what we’re calling their difficult 13th album. In truth, there’s little difficult about ‘The Punishment Of Luxury’. Our Editor, who wrote the cover feature, suggests it’s their best album since 1980’s ‘Organisation’. That’s fighting talk. Find out what Paul and Andy have to say about the matter in the new issue.

We’re delighted to have interviewed Morton Subtonick, one of the early innovators of electronic music and co-founder of the San Francisco Tape Center alongside Pauline Oliveros and Ramon Sender.

Elsewhere, Blancmange discuss their retrospective boxset ‘The Blanc Tapes’, I Speak Machine tell us about their zombie horror film and soundtrack album, and Talking Heads/Tom Tom Club‘s Chris Frantz and Tina Weymouth enjoy a chat with modular synth manipulators Xeno & Oaklander, during which Tina divulges a truly wince-inducing Kraftwerk anecdote. And talking of Kraftwerk, we visited Düsseldorf to watch them perform as the city hosted the Tour De France Grand Départ. There were a lot of bicycles.

All of that, plus Irmin Schmidt talks about the making of Can‘s classic ‘Spoon’, UNKLE‘s James Lavelle reveals a few of his formative influences in Under The Influence, there’s our regular columnists Synthesiser Dave, Jack Dangers and Fat Roland, not to mention a ton of album reviews in our Back Section, all the best new gear and toys in our Front Section, and so so so so much more.

With Readly you can read Electronic Sound (issue 33) and thousands of other magazines on your tablet and smartphone. Get access to all with just one subscription. New releases and back issues – all included.
Try Readly For Free!
Electronic Sound