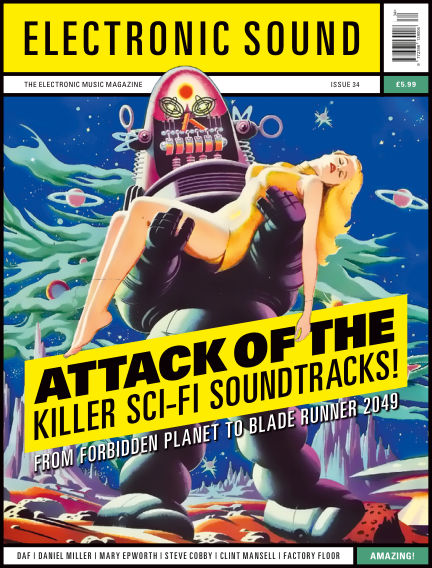 In this issue of Electronic Sound : October 2017: a generation holds its breath as ‘Blade Runner 2049’ arrives on cinema screens across the world. Is it going to stomp all over your cosy relationship with the original? We’re looking at you, ‘Rollerball’ (2002), ‘The Wicker Man’ (2006), and ‘Get Carter’ (2000). The fact that no one responsible for these abominations was given a custodial sentence of any sort seems a profound miscarriage of justice.

We go to press before the film’s general release, but it looks like ‘Blade Runner 2049’ is as fabulous as its celebrated older sibling, with Erik Davis of the respected movie website Fandango calling it a “sci-fi masterpiece”. We knew the spirit of the original Vangelis soundtrack – such a critical part of the ‘Blade Runner’ world – was in safe hands when it was announced that Jóhann Jóhannsson would be scoring the film. And then he was jettisoned in favour of Hans Zimmer.

It’s a story as old as Hollywood dream factory itself, and in our cover feature we investigated the phenomenon, from 1956’s ‘Forbidden Planet’ right through to ‘Blade Runner 2049’. Frankly, the world of scoring films, which brushes up against Hollywood’s huge budgets and teams of accountants, producers and unhinged creatives, makes the perils of the music business look like a tea dance at an old folks’ home.

There’s no doubt about it, music created for films has produced some spellbinding moments. We talk to Clint Mansell (who is no stranger to spellbinding soundtracks) and we take a look at the idea of re-soundtracking classic films with the help of Asian Dub Foundation and Factory Floor.

While this is a bit of film music special, we also found time to talk to Daniel Miller ahead of his appearance at the We Are Robots event at the Old Truman Brewery in London at the beginning of November. We’ll be there, so come and say hello if you’re in the area. And let us not forget it was Mr Miller who introduced the Düsseldorf synth tough nuts DAF to British audiences when he signed them to Mute back in 1980. The new ‘DAS IST DAF’ boxset celebrates their unique path through electronic music, and they talk to us about their decades of uncompromising electronic stylings, Nazi thugs gatecrashing their gigs, and their ongoing disdain for Kraftwerk.

You’ll also find the likes of Steve Cobby, Mary Epworth, John Foxx and many more on our pages, and we sadly say goodbye to a giant of our musical landscape, the irreplaceable Holger Czukay.

With Readly you can read Electronic Sound (issue 34) and thousands of other magazines on your tablet and smartphone. Get access to all with just one subscription. New releases and back issues – all included.
Try Readly For Free!
Electronic Sound