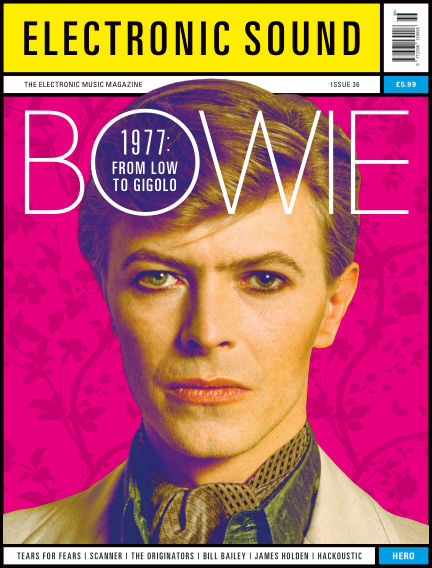 In this issue of Electronic Sound : For one that started with him in a somewhat perilous state thanks to a rampant cocaine addiction, 1977 turned out to be quite the year for David Bowie. One that saw the release of two albums that would go on to influence an abundance of musicians and artists alike. To round off 2017, we turn the clock back 40 years in our cover feature and speak to some of the people that worked the ex-Thin White Duke over the course of 1977, and chronicle the encounters (both significant and trivial) that helped shaped Bowie and what would come next – a year that started with fascism and ended with film.

One of the people that Bowie crossed paths with that year is Mark Mothersbaugh, who incidentally features as this month’s seven-inch single. We were ecstatic when Mark agreed to Electronic Sound releasing a pair of his warped and mutated Christmas songs and here you can get them for the first time on limited edition vinyl. He also revealed to us what Devo’s first few days with Bowie were like back in 1977.

Elsewhere in the issue we catch up with Tears For Fears and find out exactly what they think about Kanye West. Electronic experimentalists James Holden and Scanner reveal to us some of the secrets behind what make them tick, and we discover exactly what it means to be a sound hacker collective, and meet Sheffield supergroup The Originators. All of that, and of course our usual Front and Back sections featuring all the best new toys and tech, album reviews, interviews, Jack Dangers and his School of Electronic Music, the hilarious Fat Foland, Kris Needs, and a few other little surprises along the way.

With Readly you can read Electronic Sound (issue 36) and thousands of other magazines on your tablet and smartphone. Get access to all with just one subscription. New releases and back issues – all included.
Try Readly For Free!
Electronic Sound