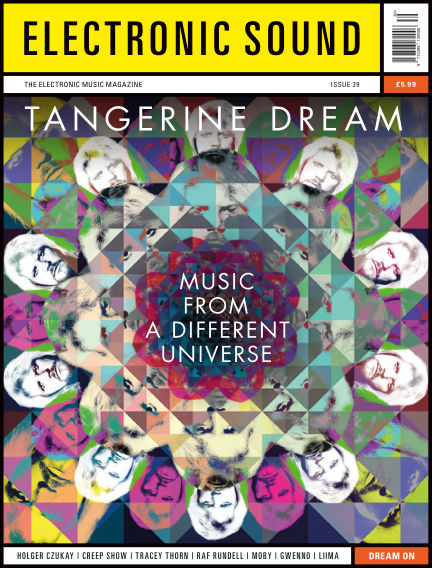 Of Germany’s two schools of electronic music (the other being in Düsseldorf/Cologne of course), the music coming out of Berlin was all about texture and mood, it was spacey, drifting and ambient, which was no surprise when you consider at the time West Berlin was a city where young men were exempt from national service.

Coupled with cheap rent, the place quickly filled with those whose idea of fun didn’t include serving in the army, but did rather involve creating the nation’s counterculture. And in Tangerine Dream’s case, they did that with synthesisers.

Elsewhere, we met up with Creep Show, our kind of supergroup featuring as it does John Grant joining Wrangler and sluggin’ it out on the mic with Stephen Mallinder. Their new album, ‘Mr Dynamite’, is an album of the year contender already!

We have the very last interview Can’s Holger Czukay gave before his sudden death last year and it found the great man in playful mood, as always.

Everything But The Girl’s Tracey Thorn has a chat about her new record, erm, ‘Record’, which is awash with synthy goodness, we catch up with 2 Bear’s Raf Mundell who has a second album and a second child to keep him busy, Gwenno, whose last album was in Welsh follows it with one entirely in Cornish, we join Liima live in Edinburgh, Moby goes Under The Influence, Age Of Chance talk us through their magnificent ‘Kisspower’ mash-up…

All of this and our Front section packed with this month’s favourite tech, toys, books, gadgets and the like and let’s not forget our bumper Back section, packed to bursting with all the latest album reviews.

With Readly you can read Electronic Sound (issue 39) and thousands of other magazines on your tablet and smartphone. Get access to all with just one subscription. New releases and back issues – all included.
Try Readly For Free!
Electronic Sound