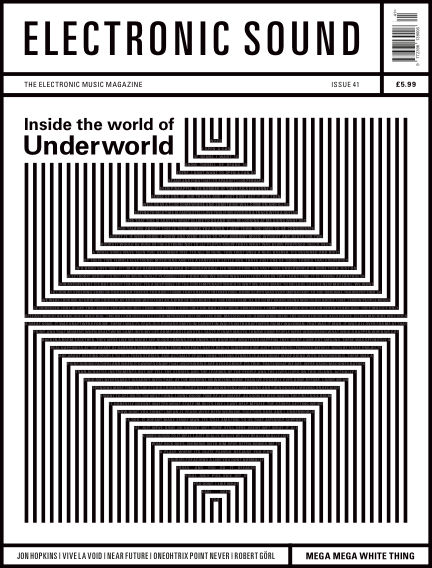 In this issue of Electronic Sound : This month’s cover feature offers a unique insight into the world of Underworld, as we spend the day with Karl Hyde and Rick Smith at their remote HQ in the rural wilds of East Anglia.

From 1994’s epic ‘Dubnobasswithmyheadman’, with its mysterious black and white sleeve art, to 2016’s much acclaimed ‘Barbara Barbara, We Face A Shining Future’, there’s long been something special about Underworld, something about their life-affirming melodies, beats and poetry that connects them to people all over the world.

By the way, if you look closely at our magazine cover, you might find that there’s a little bit more to it than first meets the eye. Almost 1,000 words more, in fact.

Elsewhere this issue, we discover what goes into the making of a Jon Hopkins record (it involves drugs, meditation and bird watching) and find out how Oneohtrix Point Never managed to creep himself out recording his new album ‘Age Of’ (think ‘The Amityville Horror’). But that’s not all…

Neil Arthur and Jez Bernholz meanwhile tell us about their minimal electronica outfit Near Future, Moon Duo’s Sanae Yamada reveals her Vive La Void side project, Rival Consoles chats about his plans to take his music into the world of film, Clare Grogan joins us for Under The Influence, and DAF man Robert Gorl relives his ‘Paris Tapes’ nightmare. But that’s still not all…

We also have an action-packed Front section, featuring our very favourite tech, toys, books and the like, plus our biggest-ever Albums section, stuffed to bursting with no less than 66 (count ’em) reviews of the latest must-hear long players.

With Readly you can read Electronic Sound (issue 41) and thousands of other magazines on your tablet and smartphone. Get access to all with just one subscription. New releases and back issues – all included.
Try Readly For Free!
Electronic Sound