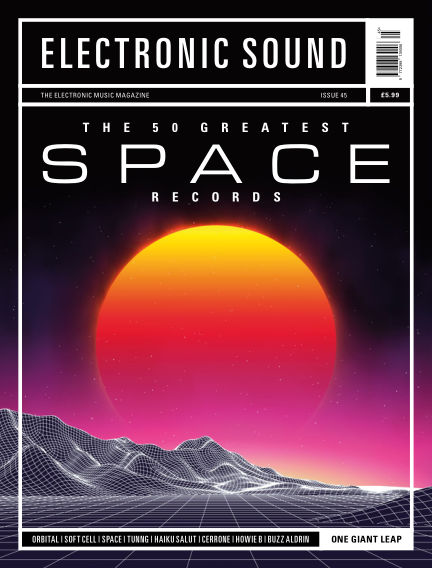 In this issue of Electronic Sound : We are taking you to the outer limits with this month’s Electronic Sound. We’ve gone where no magazine has gone before to bring you the 50 Greatest Space Records, starting off in 1958 (the year that NASA began operations) and ending with a couple of corkers from 2018. Who’s on the list? A few of our old favourites of course – Kraftwerk, The Human League, Bowie, Eno, Tangerine Dream – but we have some surprises along the way too. Rat Scabies, for instance. Yes, that Rat Scabies, playing with a group who were signed to Aphex Twin’s Rephlex label, would you believe. We’ve lots more space stuff in the issue, including a big interview with Orbital about their new album, ‘Monsters Exist’, which has a special guest appearance from Professor Brian Cox, and a great piece on the short-lived but thoroughly entertaining late 70s genre known as space disco. And talking of space disco, we tell the bizarre story of the French band Space and their legendary Magic Fly’ single too. Oh, and we have a few words from Buzz Aldrin. Yes, that Buzz Aldrin. Back on solid ground, we mark the release of a fabulous 10-disc Soft Cell boxset with an equally fabulous interview with Dave Ball. As well as talking about this new collection, Dave gives us the lowdown on Soft Cell’s last ever live show, which takes place in London at the end of September, and reminisces about some of the highlights of the band’s career, including their first time on ‘Top Of The Pops’ and their first trip to New York.

With Readly you can read Electronic Sound (issue 45) and thousands of other magazines on your tablet and smartphone. Get access to all with just one subscription. New releases and back issues – all included.
Try Readly For Free!
Electronic Sound