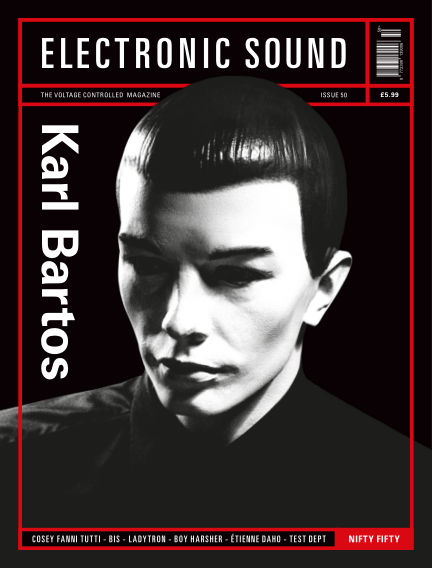 In this issue of Electronic Sound : We’re hitting the Big 5-0 with the new issue of Electronic Sound. It’s hard to believe, especially looking at our fresh young faces, but it’s true. And we’re celebrating with the help of Karl Bartos, one quarter of the classic Kraftwerk line-up, who appeared on the cover of the first issue of the magazine back in 2013. Six years on, we’re publishing an edited version of the transcript of the interview with Karl that formed the basis of our original feature. It’s a fascinating read.

Talking of fascinating reads, we also have an in-depth interview with experimental music icon Cosey Fanni Tutti, talking about art, life and her new album, ‘Tutti’, her first long-player since ‘Time To Tell’ way back in 1983. “The formation of my self is still going on and I’m happy with that,” says Cosey. “I’m quite a private and shy person. I’m also really strong and determined, so there’s a bit of conflict going on.”

Elsewhere this issue, we have features on Ladytron, Bis, Boy Harsher and Étienne Daho, while Lene Lovich tells the story of ‘Lucky Number’ and Sally Rodgers from A Man Called Adam goes Under The Influence. Test Dept step into the spotlight for Brief Encounters, our quickfire Q&A session, and Liz Wendelbo from Xeno & Oaklander chats through her first and last record purchases, as well as the one she reaches for in an emergency.

We’ve got countless album reviews too, including the lowdown on the new James Holden long-player, and our front section is jam-packed with all manner of tech, toys, books and more. We have a little potted history of Electronic Sound, looking back over our previous 49 issues. Hey, we’re allowed to indulge ourselves a little this month. It is our birthday, you know!

With Readly you can read Electronic Sound (issue 50) and thousands of other magazines on your tablet and smartphone. Get access to all with just one subscription. New releases and back issues – all included.
Try Readly For Free!
Electronic Sound