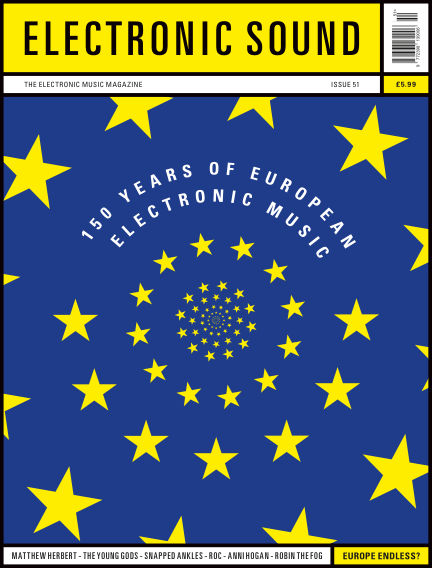 In this issue of Electronic Sound : We’re marking this month with a brief history of some of the contributions made by Europe to electronic music, starting with the International Exposition of Electricity in Paris in 1881, where the attendees included German physicist Hermann Von Helmholtz, the inventor of the very first sound synthesiser. Our European jaunt also takes in other early instruments, including the Ondes Martenot and the Trautonium, the creation of electronic music studios like RTF in Paris, WDR in Cologne and Philips in Eindhoven, and the role of artists ranging from Kraftwerk and Jean-Michel Jarre to Daft Punk and Speedy J. It’s quite the trip.

You won’t need a passport or any kind of visa to visit the other areas of the magazine, the whole place is Schengen compliant. Feel free to spend as much time as you like in the stimulating company of Matthew Herbert, The Young Gods, Snapped Ankles, ROC, Anni Hogan, Luke Abbott and more. You can also recreate the Trans-Europe Express train route from Paris to Düsseldorf. Via Vienna, of course. We can’t guarantee you’ll meet Iggy Pop and David Bowie, but do enjoy the late night café.

With Readly you can read Electronic Sound (issue 51) and thousands of other magazines on your tablet and smartphone. Get access to all with just one subscription. New releases and back issues – all included.
Try Readly For Free!
Electronic Sound