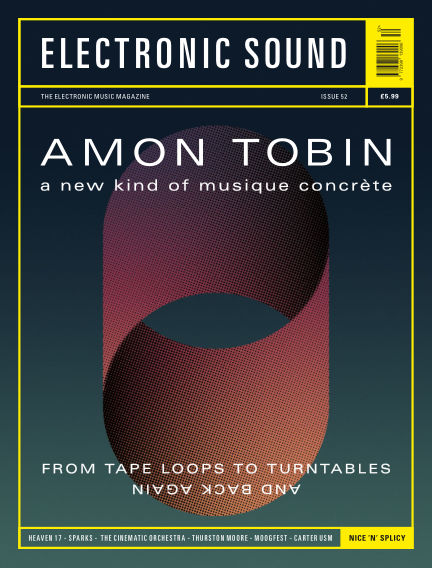 In this issue of Electronic Sound : This month’s cover feature is an exclusive interview with Amon Tobin, the sonic adventurer whose long-awaited new album reshapes musique concrète for the 21st century. As well as an in-depth discussion of this amazing record, ‘Fear In A Handful Of Dust’, we also talk to Amon how he goes about his studio business and how his work fits into the experimental electronic music timeline. It’s a revealing read.

To accompany the interview, we trace the way that musique concrète has developed and influenced our listening pleasures over the last 70 years. From tape loops to turntables, from post-war Paris to Bladerunner Los Angeles, which is where Amon Tobin is based at the moment, our list of deconstructed sounds includes artists such as Pierre Schaeffer, John Cage, Steve Reich, Brian Eno, Coldcut and DJ Shadow. It’s an impressive cast.

Elsewhere this issue, Heaven 17 unbox their rather exciting and long overdue career retrospective collection and Sparks claim their classic ‘No 1 In Heaven’ album isn’t disco. The Cinematic Orchestra show us to our seats to enjoy their latest blockbuster and experimentalist of note Thurston Moore talks about musique concrète legend Luc Ferrari. We have lots of great Moog stuff too, including a brief history of Moogfest, which takes place this year at the end of April in Durham, North Carolina.

There’s much more besides, especially in our jam-packed reviews section. It was quite a tussle for our Album of the Month spot this time round. The Chemical Brothers, New Order, Richard Norris, Popol Vuh and ROC were among the contenders. Any guesses for who might have won?

With Readly you can read Electronic Sound (issue 52) and thousands of other magazines on your tablet and smartphone. Get access to all with just one subscription. New releases and back issues – all included.
Try Readly For Free!
Electronic Sound