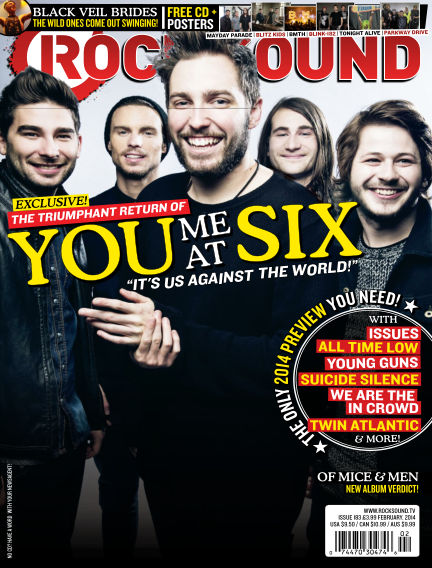 In this issue of Rock Sound : Welcome to rock sound! There’s no time to waste! We’re diving straight into 2014 with an issue packed full of the most awesomely awesome stuff. First up, there’s eight pages on my time spent with You Me At Six on tour around Europe and UK, which was the first time they’d ever let any journalist on the bus; I like to think they showed off a side to them that’s never anyone thinks the article is half as good as their new album then that’ll be a hearty compliment indeed. And then there’s our colossal preview of all the bands who are going to matter this year – it was a frankly insane undertaking just before Christmas, but we pulled it off, and I’m hugely proud of how exhaustive (and exhausting!) it is. Last year was one of the best in Rock Sound’s history, and we’re going to make this one even better. Promise. Ben Patashnik, Editor

With Readly you can read Rock Sound (issue February 2014) and thousands of other magazines on your tablet and smartphone. Get access to all with just one subscription. New releases and back issues – all included.
Try Readly For Free!
Rock Sound