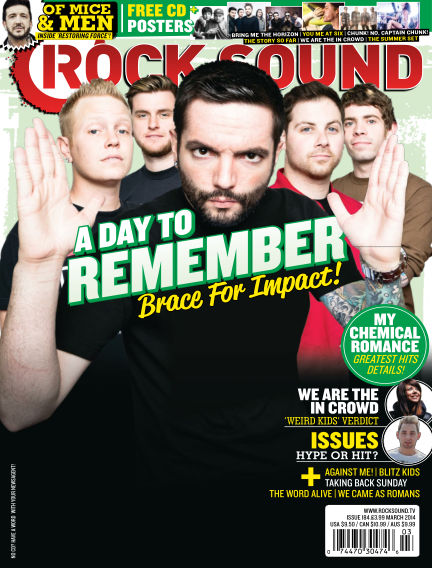 In this issue of Rock Sound : Hello, gentle reader of Rock Sound – we’re well into 2014 now, which is the future… and because it’s the future, you can read this very magazine on an iPad or a Galaxy Note or indeed any mobile device, just like I’m doing here in a totally comfortable, natural pose. Just head to smarturl.it/rsapp and get involved. And now, on with the issue: we’re all very excited about A Day To Remember’s mega-tour and return to the cover of Rock Sound, as captured in Andrew Kelham’s enlightening and intimate feature. And another band who are going to have a monstrous year are Of Mice & Men, which I’m sure will come as a surprise to precisely no one; check out Andy Biddulph’s interview with frontman Austin, because it’s a corker. And now I’ve run out of space, so see you next mon Ben Patashnik, Editor

With Readly you can read Rock Sound (issue March 2014) and thousands of other magazines on your tablet and smartphone. Get access to all with just one subscription. New releases and back issues – all included.
Try Readly For Free!
Rock Sound