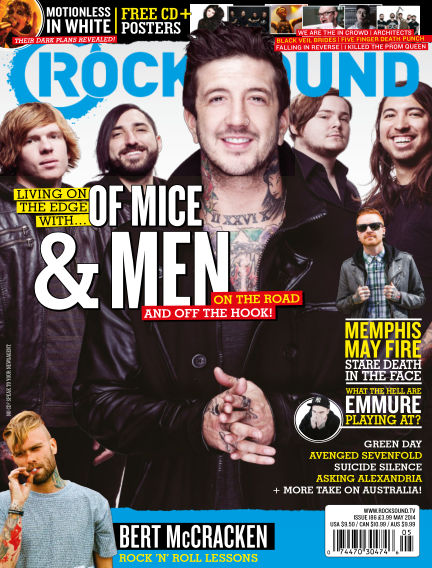 In this issue of Rock Sound : WELCOME TO ROCK SOUND! Of all the bands on the rise over the past few years, Of Mice & Men intrigue me most. There’s something about them that’s always made me think they’re head and shoulders above their peers, and this month’s cover feature gets right up close and personal with them. On a personal note, this is my last issue as Editor. I’ve enjoyed doing this more than I could possibly explain – when I was a kid, I always thought a job was something you did in between the times when you were actually happy, and at no point did I think it was possible to combine those things. It’s been a real honour: the highlights are too numerous to mention and I’ve forgotten the shit times already. I’m leaving you in the more-than-capable hands of Ryan Bird, Dave McLaughlin and Andy Ritchie, though, who are going to take Rock Sound to much bigger and better things than I ever could. See you around – it’s been
excellent. Ben Patashnik, Editor

With Readly you can read Rock Sound (issue May 2014) and thousands of other magazines on your tablet and smartphone. Get access to all with just one subscription. New releases and back issues – all included.
Try Readly For Free!
Rock Sound