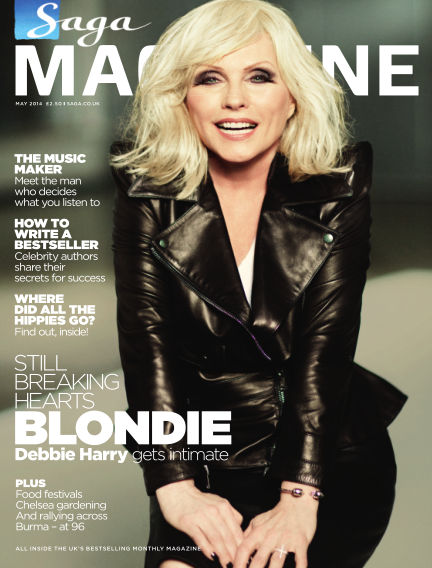 In this issue of Saga Magazine : There’s a definite festival flavour to our May issue, from our cover-star interview with Blondie’s rock-icon singer Debbie Harry, who’s appearing at next month’s Glastonbury Festival, to the rise and rise of food festivals across the land. Ever wondered where all the hippies went? Well, many of them are still proclaiming peace and love, whether dropping out or tuning in to big-business fortunes. And we meet Jeff Smith, head of music at Radio 2. He’s’s the ultimate pop picker, responsible for drawing up the playlists and determining the background music to so much of our lives. Plus, we reveal the all-time favourite playlists of Paul McCartney, Barack Obama – and the Saga Magazine team.

McCartney, Barack Obama – and the Saga Magazine team.
Got a book inside you? Turn straight to our celebrity authors – Jeffrey Archer, Barbara Taylor Bradford and Bernard Cornwell – to discover their secrets of writing a bestseller. And those with a literary leaning will also be delighted to see that we’re hosting our first event at the Hay Festival this year. Editor-at-large Emma Soames will be chairing a debate with media mogul Arianna Huffington, author Deborah Moggach and comedy writer and QI producer John Lloyd on what the future holds for Baby-boomers. It promises to be great fun – and we hope to see you there.

If classic car rallying is more your thing, you’ll love our account of former manager of the McLaren Formula 1 racing team Alastair Caldwell’s gruelling 1,500-mile trek across Burma. Who did he choose to accompany him as navigator? Why, his 96-year-old mother, Dorothy, of course. And she was one of the few navigators not to need spectacles to follow the road book! All that as well as our unrivalled coverage of the arts, money, health, gardening, food and drink, travel, and all the things that matter to the over-50s.

With Readly you can read Saga Magazine (issue May 2014) and thousands of other magazines on your tablet and smartphone. Get access to all with just one subscription. New releases and back issues – all included.
Try Readly For Free!
Saga Magazine