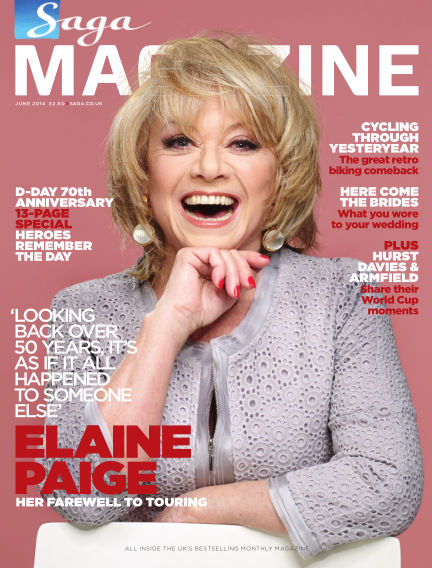 In this issue of Saga Magazine : This month is the 70th anniversary of D-Day, and the June issue of Saga Magazine features a 13-page special section on the greatest invasion force ever assembled. Veterans have returned to Normandy to be photographed in the very locations where their personal triumphs and tragedies took place; we examine the kit with which our airborne forces and the RAF were equipped for the task; and have first-hand accounts from a WAAF who helped monitor operations from the ground and an RAF navigator who was on the first Lancaster over France on that momentous night of June 5.

As the England team heads to Brazil hoping for victory, old hands including Sir Geoff Hurst, Barry Davies and Jimmy Armfield tell us about their abiding World Cup memories. No prizes for guessing what Sir Geoff’s is! With another goal in mind, we report on the cyclists gearing up their vintage bikes to take part in the UK’s first L’Eroica Britannia race.

Meanwhile, Elaine Paige, the First Lady of the West End stage, is preparing to wind down. On the eve of her farewell tour, she reflects on her professional triumphs, personal regrets and the pivotal role Dustin Hoffman played in her life. And as our very own music writer Mark Ellen’s memoir about his lifelong love affair with pop is published, he recalls the heady days of rock before he ‘turned into his dad’. Plus, five of our readers have turned back the clock to share their magical wedding-day memories with us. We’ve photographed them with their bridal gowns to tie in with the V&A exhibition this summer. All that, as well as our unrivalled coverage of the arts, money, health, gardening, food and drink, travel, and all the things that matter to the over-50s.

With Readly you can read Saga Magazine (issue June 2014) and thousands of other magazines on your tablet and smartphone. Get access to all with just one subscription. New releases and back issues – all included.
Try Readly For Free!
Saga Magazine